In 1943, a British fighter plane crashes in Nazi-occupied France and the survivor tells a tale of friendship, war, espionage, and great courage as she relates what she must to survive while keeping secret all that she can.

Fantastic submitted by klickitat on March 23, 2013, 2:02pm Run, do not walk, and find a copy of this book. Suspenseful, touching, well researched.

Wonderful submitted by camelsamba on June 29, 2013, 8:37pm I could sense some of the twists that came (not in detail, just in direction), but the layers and connections were so intricate and multi-faceted that it was hard to imagine how someone could come up with all this. As soon as I was finished I wanted to start again, just to uncover some of that complexity - but I also wanted a break. And then it had to be returned for the next patron on the hold list. I have since re-read it and would gladly do so again.

Historical FIction submitted by mowjac on August 4, 2013, 10:16am An excellently written and harrowing tale of the friendship between two women during World War II. Gripping and at the same time, hard to read. I don't really understand why the publisher coded this YA fiction, it certainly has adult themes and is appopriate for any age. Like your female characters to be daring and capable? Get this book!

Amazing! submitted by alumeng.ajl on June 13, 2014, 6:07pm This is the kind of book that is so deadly serious that you feel like you should be, too. But then there were times when it made me laugh out loud. It's completely tragic, yet oddly uplifting and wonderful. Most of the twists were wonderfully unexpected, and I loved the writing style. Personally I found Queenie far more interesting than Maddie, but thought that the way the book ended was rather fitting. Will definitely recommend it, for all of time.

Great women characters submitted by Susan4Pax -prev. sueij- on June 17, 2014, 8:31pm A very cool book about women in WWII in England. Definitely something that I will eventually want my daughter to read when she reaches the age range for it.

What was tough about it was that the early part of the book rambled quite a bit. If it hadn't been a book club book, I'm not entirely sure that I would have kept at it as diligently, though it was definitely good enough to keep reading. As you read the story, though, it becomes clear just *why* the story is rambling, and that becomes easier to get through.

And then, when you wonder what else could possibly fill the rest of the book, the second half hits. Wow. It picked up quite a bit from there. So, great book, great women characters, learned a lot, but got off to a slow-ish start. I can live with that.

Highly Recommended submitted by Lyd on June 15, 2015, 2:35pm I appreciate that this book focuses on a female main character. Most important figures in history are men and there is not enough focus on women and what they have done for the world throughout history and today. I would highly recommend this book. It includes history, a great plot (slow at first but speeds up and is definitely worth your time), and powerful characters.

Code Name Verity submitted by abigail.crampton on June 17, 2018, 5:34pm 3.5/5 Stars. It was a good story, but I think it could have been told a bit better given the hype. A lot of missed cultural references and the drama/suspense fell flat for me.

WOW submitted by www.net on July 6, 2018, 12:01am I loved this book so much. It was really incredible. I recommend it to everyone that I can think of, and anyone who asks for suggestions.

Alright submitted by c_zhang on June 28, 2019, 12:06am A bit overrated, but a powerful and engaging story nonetheless. 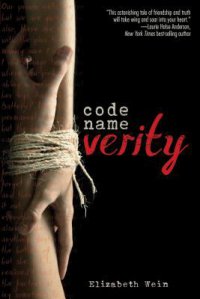