Sequel to: Crown of midnight.
Royal assassin Celaena must travel to a new land to confront a truth about her heritage, while brutal and monstrous forces are gathering on the horizon, intent on enslaving her world.

Very Well Written submitted by catlover17 on June 12, 2015, 11:58am This book was a really great read, and I finished it in one day, even though it's probably not intended to be a quick read. Even though there were multiple plots happening in the story, I felt as if this was more of a "connector" book in the series, rather than an actual, significant chunk.

Great series! submitted by MetaMara on June 23, 2016, 1:41pm This is a really great series with a strong female main character.

A thrilling set up submitted by cekandera on July 6, 2017, 11:29am My love for this series continues to grow. S.J Maas is a master story-teller; the way she cares and develops her plots, world, and characters shines. For the past two books we've only received hints as to the breadth and depth of Maas' world, and we are finally hit full force with the sheer scale of her world in Heir of Fire. This sudden expansion was both one of the highlights, and one of the worst parts of the novel, for me. The introduction of two new settings and characters (the witches and faeries) was thrilling but felt very rushed. While I was definitely entertained by the multiple storylines, I felt the dispersion of the plots was not carefully thought out. For instance, while I love Dorian, his and Sorscha's story felt rushed and underdeveloped. I really, really, really, wanted to like Sorscha but her character felt too one-dimensional and underdeveloped for the significance she played. Towards the end of the book, after the battle at Mistward, Mannon's storyline was wrapped up and I actually laughed out loud because -- in the heat and intensity of the battle scenes and the revelations intertwined with it -- I had completely, utterly forgotten about the witch's story.

Ultimately, I loved this book and cannot wait to continue the series. The ending set up some major, incredible narrative arcs for the rest of the series. But some issues with organization and sudden expansion I rated Heir of Fire with 4 stars. 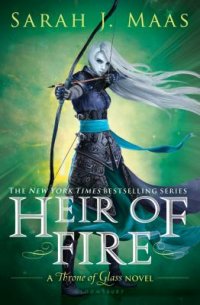