'First jumper -- Tris!" -- "Careful, Tris" -- "You look good, Tris."
A collection of four pre-Divergent stories plus three additional scenes from Divergent, all told from Tobias's point of view, that follow Tobias's transfer from Abnegation to Dauntless, his Dauntless initiation, the first clues that a foul plan is brewing in the leadership of two factions, and the weeks after he meets Tris Prior.

Nice addition to the Divergent series submitted by VickyB77 on June 12, 2015, 8:40am Don't expect any big reveals, but this collection is a good way to "flesh-out" Four a little bit more. It's nice to get a bit of a background about him, and more interesting to see things from his perspective. Roth even re-wrote a couple scenes from "Divergent", but from Four's view instead of Tris's. Pretty cool!

Great submitted by ECReader on July 9, 2015, 12:02pm This was great at revealing all the things we were wondering about four. Loved it, but wouldn't say it si part of the series because the series ended with Allegient.

Well-written back story submitted by camelsamba on July 12, 2015, 8:43pm If, like me, you were vaguely disappointed by the final book of the Divergent series, you should read this as an antidote. It provides interesting insights into how Tobias came to be Four. It's a well-written back story, in the form of four short stories. You can even read it after Divergent and without reading the other two - it doesn't have spoilers for the other books.

Four submitted by SBNB on July 28, 2015, 12:08pm This is a great fourth book in the Divergent series. It’s interesting to see the beginning events through Four’s perspective.

Four Book submitted by lauradu_palmer on July 12, 2016, 9:20pm A good edition to the divergent series. Although, the short stories seem unfinished.

A good read submitted by naetdoc on June 17, 2018, 3:53pm This book is very interesting and will keep you hooked.

Pretty good submitted by sbeegees on August 6, 2019, 12:05pm A nice companion book to the divergent trilogy

ok submitted by eliadler on July 16, 2020, 10:44am This book had stories from Tobias' point of view. It wasn't as good as the actual series, but i am still glad i read it. 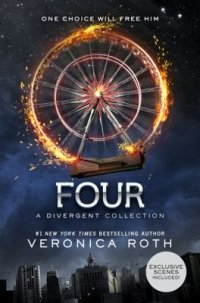