When my Name was Keoko Youth level.
With national pride and occasional fear, a brother and sister face the increasingly oppressive occupation of Korea by Japan during World War II, which threatens to suppress Korean culture entirely.

Great Portrayal submitted by tree64 on July 14, 2011, 6:56pm This book wonderfully portrays how life was like in Korea back when the Japanese had seized control of it during World War II. I think that everbody should read it, and that it is very meaningful.

Great submitted by leehannah on July 18, 2012, 9:16pm This book was sad but amazing at the same time. I learned quite a lot and Linda Sue Park does an excellent job of telling the story. I really like the books that she wrote. I found this one particularly interesting because it talks about the Korean Occupation.

Awesome submitted by jangmikyoung on July 18, 2012, 9:28pm This book was really good. It was sad, but it was still very interesting. I learned a lot about the Korean Occupation. I really felt like I was involved in the story and that I was actually there. 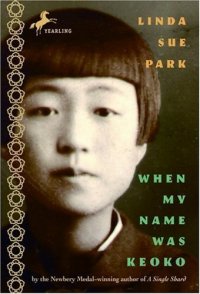