On November 22, 1963, three shots rang out in Dallas, President Kennedy died, and the world changed. What if you could change it back? The author's new novel is about a man who travels back in time to prevent the JFK assassination. In this novel that is a tribute to a simpler era, he sweeps readers back in time to another moment, a real life moment, when everything went wrong: the JFK assassination. And he introduces readers to a character who has the power to change the course of history. Jake Epping is a thirty-five-year-old high school English teacher in Lisbon Falls, Maine, who makes extra money teaching adults in the GED program. He receives an essay from one of the students, a gruesome, harrowing first person story about the night fifty years ago when Harry Dunning's father came home and killed his mother, his sister, and his brother with a hammer. Harry escaped with a smashed leg, as evidenced by his crooked walk. Not much later, Jake's friend Al, who runs the local diner, divulges a secret: his storeroom is a portal to 1958. He enlists Jake on an insane, and insanely possible, mission to try to prevent the Kennedy assassination. So begins Jake's new life as George Amberson and his new world of Elvis and JFK, of big American cars and sock hops, of a troubled loner named Lee Harvey Oswald and a beautiful high school librarian named Sadie Dunhill, who becomes the love of Jake's life, a life that transgresses all the normal rules of time.

Liked It submitted by jaegerla on December 29, 2011, 8:37am For fear of ruining the story for anyone all I will say is that:
1) Stephen King does a great job of bringing the past to life
2) He manages to give the Oswalds humanity
3) He makes a lot of plugs for the value of libraries. They were integral to research in the past, offer aid to millions of people now, and will be extremely important in the future as well.

Irresistable concept submitted by markwells on March 27, 2012, 2:43pm Show of hands. Who would like to go back in time and change something? Just be careful what you wish for. This was a good book though Mister King seems to get somewhat long-winded in the middle portion. I also thought there was too much emphasis on the love story aspect of the book. All in all this was an enjoyable read. B+.

Page-Turner submitted by rjm5001 on June 14, 2013, 1:52pm A thrilling novel that strays from King's usual horror genre, turning a hackneyed time travel plot line into a real page-turner. I highly recommend to anyone who has the determination to get through the 800+ pages!

Long but worth it. submitted by chadbertel on June 30, 2016, 9:43am This is a very long book that could be slimmed down by an editor if they could stand up to King. Having said that I still really like it. It gives a new look at a story that most people know. I have recommended this book multiple time now. If you read the book first you will be disappointed in the Hulu mini series.

Makes you wonder submitted by teotar on July 8, 2016, 10:02am This book was fun to read. While I was reading, I found it run to take a minute to ponder what the results of Jake's actions could mean for the future. What I cz e up with was nowhere close to what King came up with.

Simply Amazing submitted by Meginator on August 4, 2017, 10:24pm Stephen King is an exceptionally wonderful writer, and though the premise alone is good enough to sustain a novel of this size, 11/22/63 has an indefinable quality of excellence about it. I can't say exactly how, but King draws readers into his world effortlessly and his characters, both real and imagined, immediately come to life. This is far from a horror novel, but a constant thread of dread hums beneath its surface, as history as we know it resists alteration. This book is incredibly, impossibly good and deserves as wide an audience as it can get.

Answer to an age old question submitted by bmarble on June 24, 2018, 10:41am Most of us struggle when asked what our favorite book is, but struggle no more! This is by far my favorite book. Stephen King puts a wonderful spin on the classic "time-traveler tries to save the world by changing history" plot line. I would highly recommend this novel, even for people who typically stay away from King books. He really branches out from his typical horror with this one and is suitable for everyone (adults and teens that is).

A must read even if you think you don't like Stephen King! submitted by mickplu on June 10, 2022, 10:37pm This book looks daunting for its size alone but every word and page is worth the read. It's part science fiction, part romance, part historic/speculative fiction. It would make a great book for discussion in a book club. Loved the plot, characters and the "what if this had happened this way?" elements of the book.

Favorite book of all time submitted by svenetianer on August 28, 2022, 11:36pm I love this book. Some of Stephen King's novels go a little too into detail...but this was perfect. I fell in love with the characters and was sad when I finished it. Despite its length, I have read it more than once... 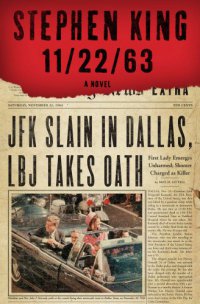