"A lush, thrilling debut--a publishing event already the subject of an article in The New York Times--about a year in the life of a uniquely beguiling young woman, set in the wild, alluring world of a famous downtown New York restaurant. "Let's say I was born when I came over the George Washington Bridge..." This is how we meet unforgettable Tess, the 22-year-old at the heart of this stunning debut. Shot like a bullet from a mundane past, she's come to New York to escape the provincial, to take on her destiny. After she stumbles into a coveted job at a renowned Union Square restaurant, we spend the year with her as she learns the chaotic, punishing, privileged life of a "backwaiter," on and off duty. Her appetites are awakened, for food, wine, knowledge and experience; and she's pulled into the thrall of two other servers--a handsome bartender she falls hard for, and an older woman whose connection to both young lovers is murky, sensual, and overpowering. These two will prove to be Tess's hardest lesson of all. Sweetbitter is a story about discovery, enchantment, and the power of what remains after disillusionment"-- Provided by publisher.
"A year in the life of a young woman who comes to New York to discover herself"-- Provided by publisher.

Wow! What a book! submitted by Lucy S on June 22, 2016, 7:02pm Stephanie Danler pitched her idea for this book to an editor while working as a backwaiter at the Union Square Restaurant in New York. I'm so glad he took time from his meal to listen to her. This was a great book. Danler writing sucks you in immediately and makes you feel like you are part of this strange, behind the scenes, restaurant world. ut more than that makes you remember when you where 22, when you were living in a new city. She switches between first person and second person narration which is very effective here and she can really turn a phrase, her writing intense and moving. I couldn't put this book down. Read it!

Unfortunately didn't agree with the hype submitted by lexinylander on July 12, 2018, 7:19pm I wanted to love this but I just didn't. It felt like an almost 400 page book about one year in which almost absolutely nothing happens. New York restaurant scene Holden Caulfield. I didn't know Tess's name until that Stuck in an Elevator whore scene, which feels tragic. She feels very unmoored and aimless (I know that's the point) but in a way that isn't really relevant to the narrative. The way it's written was absolutely beautiful though, and the second person bits at the beginning of each chapter were lovely!

"Yes, Sasha." I turned to him. A few weeks ago he'd dropped his pizza on the ground and offered me fifty dollars to eat it. I did, and he paid me. Like a gentleman. "When are you going to take me out?"

"Have you seen Jake?"
"Which one is Jake?"
"The bartender. Always looks homeless. Crazy eyes."

Weird power structures and a lot of drugs and basically 200 pages of that feeling of when you're new at a job and don't know shit and hate your entire life. I'll pass. 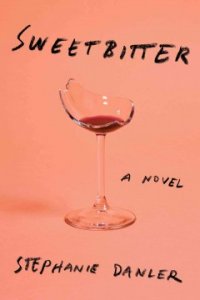