"Two half sisters, Effia and Esi, unknown to each other, are born into two different tribal villages in 18th century Ghana. Effia will be married off to an English colonial, and will live in comfort in the sprawling, palatial rooms of Cape Coast Castle, raising half-caste children who will be sent abroad to be educated in England before returning to the Gold Coast to serve as administrators of the Empire. Her sister, Esi, will be imprisoned beneath Effia in the Castle's women's dungeon, and then shipped off on a boat bound for America, where she will be sold into slavery. Stretching from the tribal wars of Ghana to slavery and Civil War in America, from the coal mines in the north to the Great Migration to the streets of 20th century Harlem, Yaa Gyasi's has written a modern masterpiece, a novel that moves through histories and geographies and--with outstanding economy and force--captures the troubled spirit of our own nation"-- Provided by publisher.

Impressive debut! submitted by Lucy S on June 17, 2016, 8:51am Each chapter of this debut epic novel reads like a short story compiling a strong tale that spans history and place. Like any short story collection, some pieces are stronger than others, some characters more fully realized. All in all a great read.

Lyrical debut novel submitted by glenna on June 22, 2017, 10:33pm This should be required reading for high school students as it has much to say about racial inequality over a long period of time. The novel (really a series of short stories) traces members of a family tree with two main branches - one in America and one in Ghana and describes their life experiences. The book is well written but quite depressing in that it shows man's inhumanity to man.

Great read submitted by soblend on July 8, 2017, 7:16am The stories in this book gave me a sense of the slave trade and the role of African natives played. There was a stark difference in the lives of Effia's descendants in Africa and Essie's who were enslaved in America. Also loved how strong the women were despite the hardships they endured. Very engaging book that anyone with an interest in history would enjoy. Not as gruesome as The Underground Railroad making it an easier read.

Like the best kind of Oprah book submitted by christinacz on July 14, 2017, 8:10pm You won't want to put it down because of its balance of tender beauty and heartbreak. The way the stories are organized, the author weaves the lineage of two families until the modern day when the two lines meet--which is a structure that ensures you won't want to put it down until you get to present-day romance. It has all the makings of a perfect Oprah book, historical tales that reads like folklore, intergenerational strife, romance, scenes that stick in your mind. It was the best book I've read all year and I'm so grateful for it. Also, they're turning it into a movie so put down whatever you're reading and get this book.

Outstanding! submitted by qmama2 on July 28, 2017, 3:53pm In 2005 I was able to go to Ghana for grad school. It was life changing for me as African American which is what first peaked my interest in the book. When I opened HOMEGOING I had no clue of the journey I was about take. Tracing the linage and experience of these two families (one family) was amazing! I was transported back to the Cape Coast Slave Castle! I was in the plantation fields of the South. I was in the 1920s Harlem. I was a college student in an all white university. She was telling my story. I am grateful for this book. I advocate that everyone read it! Q

This Will Leave You Breathless submitted by zixyxuan on August 29, 2017, 12:57am This book has been one of my most anticipated reads of 2016 and I didn't get to read it until now. But, I am so glad I did because this book was phenomenal (especially for a debut novel).

First of all, Homegoing had a very original plot. When I got the hang of the structure of the book, I thought I was going to forget all of the characters and their predecessors and descendants. But to my surprise, Gyasi did an amazing job of scattering minor details throughout her chapters that would rollover into the next generation.

Undoubtedly, this book was beautifully written. There was so much dimension added to each of the characters, and did I mention that this book is less than 300 pages? Insane! I think Gyasi is a master storyteller for bringing each of her fourteen characters to life and detailing the hardships they had to face, from the Transatlantic Slave Trade to the Civil Rights movement. I found myself wholeheartedly invested in each of the characters and feeling all the frustrations that they had to endure.

Honestly, my only issue with this book -- and thus why this book didn't get the full five-stars for me -- is how unsatisfying the ending felt for me. I don't know what I was exactly expecting, but I want to see more of Marjorie and Marcus's interactions, but the book ended very abruptly after their meeting.


Thinking about the stories that you haven't heard submitted by aprille on July 15, 2018, 8:39am In this novel that spans many generations of a family divided between Ghana and the US, each chapter concerns the life of one character in the lineage. There are many unusual perspectives -- a gay man in Ghana in the late 18th C, a mentally ill person, a prisoner, a concubine of a white slaver, a drug addict, etc. Late in the novel, one character is a history teacher and tells his students that history is storytelling and that the people with power are better able to tell their stories. He advises his students to always listen for the stories of the people without power because they hold a piece of the truth as well. I think this is what this book is about. I found it quite interesting, though, as, with a book of short stories, it takes some work on the reader's part to catch up with each new setting and character along the way.

Amazing view of slavery across continents and generations submitted by Susan4Pax -prev. sueij- on July 21, 2018, 10:18am One of the most amazing books I've read in ages. This astonishing debut novel follows the descendants of two Ghanian half sisters, one who stays in Africa and one who is sold as a slave in the US. Each chapter tells the story of an episode in the life of the next generation, alternating between the two families on opposite sides of the ocean. In many ways, it feels like interconnected sets of short stories, which I usually can't stand. However, in this case, the threads of continuity held the narrative together for me in ways I would not have expected.

Besides amazing research, astonishing characters, and an absolute *treasure trove* of historically accurate information, I think the two things I love most about _Homegoing_ are these: first, that Gyasi addresses what was happening among Africans at the time of the slave trade (some were complicit and some were victims, and this wrought havoc on their communities). Second, that the effects of slavery are viewed down six generations. Many, many books about slavery look at two or three generations (main character with their parent and/or child). This was something else entirely. This was trauma across generations, as mandated by the ownership of human beings.

The ending was just a touch too "well of course that will happen" for me, though I understand why the author wrote it that way. It certainly didn't detract from the book in any significant way for me.

This is the 2018 Washtenaw Reads book, and we read it for book club as well. It sparked wonderful discussion. I cannot recommend it highly enough.

Remarkable submitted by jaromatorio on July 22, 2019, 12:56pm This is one of the best books I’ve read in recent years!! The story was so so powerful, and was written absolutely beautifully.

Amazing submitted by alemmon100 on August 8, 2021, 9:47am One of the best books I've ever read. Each chapter introduces a new character, yet Gyasi's writing pulls you into each character's story. The way she weaves the story together is just incredible.

Brilliant submitted by Nu on August 23, 2022, 6:56pm One of the best books written and a personal favourite. So beautifully written. 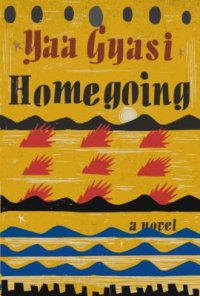