In an overpopulated world where all signs of nature have been obliterated and a wall has been erected to keep out plague-ridden animals, twelve-year-old Mika refuses to believe that his twin sister was killed after being abducted, and continues to search for her in spite of the dangers he faces in doing so.

A Good Science Fiction Adventure submitted by j.carbon06 on June 21, 2011, 11:49am The Roar is a science fiction adventure takes place in the future. The entire population of the world has been forced to move behind a huge wall because of a plague that makes animals attack humans. But the Northern Hemisphere is highly overcrowded, and the poor live in terrible conditions.
The story focuses on two twins: Mika and Ellie. Ellie has been abducted and is believed to be dead. Mika is desperately sad, but he clings to his hunch that Ellie is still alive. However, Mika must keep going to school and being an ordinary kid. Then his school introduces a new extremely vigorous fitness program, and feeds the kids a mysterious drink called FitMix. Will Mika ever be reunited with his beloved twin sister? One thing is for sure: Mika's life will not be ordinary for much longer.

The Roar submitted by halofriendly on July 23, 2011, 6:01pm A really excellent story that, unfortunately (in my opinion), was bogged down by not so great writing, too many details, and unrealistic dialogue. The ending was a bit confusing too (she's setting this book up for a sequel, right?), but overall, it was honestly a great, great story. Good twists, good commentary on environmental issues, but not as good overall as I was hoping. 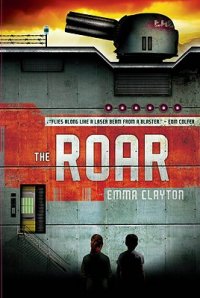