"It is the present-day, and the world is as we know it: smartphones, social networking and Happy Meals. Save for one thing: the Civil War never occurred. A gifted young Black man calling himself Victor has struck a bargain with federal law enforcement, working as a bounty hunter for the US Marshall Service. He's got plenty of work. In this version of America, slavery continues in four states called "the Hard Four." On the trail of a runaway known as Jackdaw, Victor arrives in Indianapolis knowing that something isn't right-- with the case file, with his work, and with the country itself. A mystery to himself, Victor suppresses his memories of his childhood on a plantation, and works to infiltrate the local cell of an abolitionist movement called the Underground Airlines. Tracking Jackdaw through the back rooms of churches, empty parking garages, hotels, and medical offices, Victor believes he's hot on the trail. But his strange, increasingly uncanny pursuit is complicated by a boss who won't reveal the extraordinary stakes of Jackdaw's case, as well as by a heartbreaking young woman and her child who may be Victor's salvation. Victor himself may be the biggest obstacle of all-- though his true self remains buried, it threatens to surface. Victor believes himself to be a good man doing bad work, unwilling to give up the freedom he has worked so hard to earn. But in pursuing Jackdaw, Victor discovers secrets at the core of the country's arrangement with the Hard Four, secrets the government will preserve at any cost"-- Provided by publisher.

Recommended! submitted by Lucy S on August 2, 2016, 4:45am Ben Winters imagines a world in which the Civil War never happened in this extremely relevant and intelligent novel. Through the eyes of an ex-slave, now bounty hunter we view an America where slavery still exists in some places. This important social commentary is presented in a book that reads in part like a thriller and is hard to put down. The narrative is propelled by flawed and deeply interesting characters. This book would make a great book club pick as it provides much material for discussion.

Wonderful world-building. submitted by eknapp on October 7, 2016, 11:28am In this alternate history novel, Abraham Lincoln was assassinated years earlier, undercutting the burgeoning abolition movement. This led to a great compromise in the form of a Constitutional amendment that permanently enshrined slavery in the south but prevented its spread. Underground Airlines speculates about what forms institutional slavery would take in modern America.

The protagonist is a black man who, against this backdrop, hunts escaped slaves for a living. While his conscience tears at him, he runs down another escapee only to discover that this time there are larger forces at work. He plays his Marshal Service handlers against an Underground Airlines cell in the hopes that he can finally be free of the tracking device implanted in his back and the ever present threat of return to the plantation.

Woof, reading this is getting punched in the stomach. Winters's setting rings amazingly true. The economic consequences of clinging to slavery, including sanctions from all over the world. The U.S’s necessary withdrawal from the United Nations in the ‘70s. The lagging global tech sector due to America’s failure to lead and innovate. The exceedingly plausible legalese and political history. The way real-world social and civil rights movements are swamped by the ever present slavery issue. It’s all captivating and jarring.

The actual spy-story stuff was merely okay. I don’t think the author has ever been in a physical altercation.

[SPOILER AHEAD]
But I was wholly impressed that the hero doesn’t save the world from slavery at the end. I was sure that was where we were headed. Winters instead demonstrates an excellent grasp of social inertia, which, while kind of depressing, is immensely satisfying in its authenticity.

"No future amendment of the Constitution shall affect the five preceding articles…and no amendment shall be made to the Constitution which shall authorize or give to Congress any power to abolish or interfere with slavery in any of the States by whose laws it is, or may be, allowed or permitted.

—From the Eighteenth Amendment to the United States Constitution. It is the last of six amendments that, together with four congressional resolutions, make up the so-called Crittenden Compromise, proposed by Senator John J. Crittenden of Kentucky on December 18, 1860, and ratified by Congress on May 9, 1861"

Underground Airlines submitted by leighsprauer on March 27, 2017, 12:42pm Underground Airlines is a startling look at a modern America in which slavery is not universally illegal. Although most states are free, four southern states continue to practice race-based slavery. Winters does a good job imagining this alternate reality: how history has been changed, the complicated set of laws that govern the relationship between free and slave states, and the psychologies and ideologies of both free and enslaved people. He intended, I presume, for it to be read through the lens of modern, actual race relations; as such it is a compelling look at the progress that still has to be made. Well-written and thoughtful, and as far as I know, offering a unique perspective, I would recommend it, even though it's not necessarily a great work of literature.

unique genre combo submitted by virgodt on July 1, 2017, 9:25am Really enjoyed the spy/undercover story in the context of alternate history. At the same time, it was depressingly realistic in depiction of race relations and as another reviewer put it, the social inertia in the way of any real change. I couldn't stop thinking about this book for many weeks after reading it. I highly recommend it as a read that is enjoyable immediately and thought-provoking in the long term.

Glad I read it submitted by babalasdc on July 4, 2018, 8:10pm I thought this was a really original idea and an important book to read. It definitely had some violence in it and I was a little disappointed in the ending because I felt like it was a set up for a sequel or trilogy that I didn’t expect when I started. 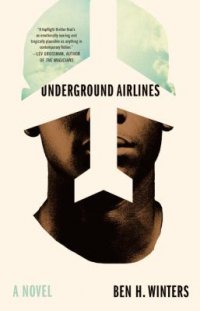