"As war surges in the dystopian society around her, sixteen-year-old Divergent Tris Prior must continue trying to save those she loves--and herself--while grappling with haunting questions of grief and forgiveness, identity and loyalty, politics and love"-- Provided by publisher.

Wow submitted by xjasx on June 16, 2012, 11:21pm I immediatly started reading it when I got it the day it came out, it definitely fit my standards, great book

Jaw-Dropping submitted by ColeenT on June 17, 2012, 4:37pm You get to know more about the characters in this book. As well as see how Tobias and Tris's relationship hold up while everything around them is collapsing. You get to meet new characters which help develop the plot line a lot more. As well as seeing some old characters. This book was full of suprises and I can't wait until the third book comes out!

:D submitted by brielle on July 14, 2012, 9:03pm This book is wonderful. I read it a while after I read Divergent, so it was sort of hard to remember what was going on and get into the story, but after 50 pages or so I was fully invested in the story. This book is exciting and reading it you get to know more about Tris's society. The "dystopian craze" is beginning to fade, and this book is a welcome revival.

Action Packed submitted by tigerbeck on July 27, 2012, 1:32pm Insurgent picked up right where Divergent left off which made it nice to read them one after the other. Divergent was good and set up the world really well, but I liked the conflict in Insurgent much better. The factions are so interesting and we get to learn more about the factions Amity and Candor. I love how the factions are this weird combination of a gang, an entire culture of dress and style, mannerisms and education training for a job. The books only skim the surface of all there is to know of this complex and detailed world. This is one of those worlds where they could write an encyclopedia about it and you'd still want to know more. The writing style was much better in this book. I didn't notice the word "I" glaring at me so much.

Tris doesn't always make good decisions. In fact, she makes some really, really bad decisions but I felt like I understood her so well that I got why she did the things she did even if it's not what I would do. My favorite thing about Insurgent was how well the author messed with your expectations of who is good and who is not. And it's not based just on who Tris likes. I kind of saw the twist at the end coming, but it still gave me chills when I read it. This was a fast read and I couldn't put it down. It left me with some deep thoughts about how easily your virtues can become a vice if you're not careful. I loved the complex idea and story arc. It was an intense, action-packed ride that had me saying "Wow" when I closed the book.

Disappointing Sequel submitted by sdunav on June 18, 2013, 5:33pm This was a very disappointing sequel to Divergent - there were way too many new characters, the relationships were ridiculous, character development was blah, and the plot arc that was continued from the first book was plodding. I almost didn't finish it.

Suitable Sequel submitted by marielle on July 5, 2013, 7:10pm This sequel was like all trilogy sequels- entertaining, but you really just want to read book 3.

really good submitted by urjasinha00 on July 7, 2013, 4:47pm Im so excited to read this book divergent was so good

meh submitted by philiptv on July 13, 2013, 4:27pm I enjoyed the first book, but this one wasn't nearly as good. Halfway through the book, I started to think that the author wrote this book for the romance. There were a few deaths that I think I was supposed to care about, but the character wasn't developed at all. I think the only reason I finished was to see what happened in the end. Disappointed :( :( :( :( :( :( :(

Awesome submitted by Motomori on July 29, 2013, 3:51pm I bet the book will be just as great as the first one judging by the reviews! Can't wait to read it!!!


great! submitted by ECReader on June 15, 2014, 2:15pm veronica roth has done it again with the second book in her series

Meh... submitted by Sunny29 on June 24, 2014, 12:30pm I was disappointed by this second installation. Roth desperately tries to jam a lot into this book, and the end result is a superficial attempt at character and plot development. Don't lose interest tho- the third book makes up for some of the missteps.

Amazing submitted by eagles on August 3, 2014, 1:47pm This book is so action packed, and really good. I loved it(although I liked Divergent better). I couldn't wait to read the last book!

Fascinating submitted by ValerieL on August 13, 2014, 12:36pm While I enjoyed the first book better, this was a decent sequel. The pace of the story was steady. I didn't feel like there were any unnecessary scenes. I think Tris & Four both acted as typical teenagers, albeit ones that had to grow up more quickly than most do today.

The suspense level was just right for me. I'm a wuss when it comes to things that are too scary, but this kept the level just right. Enough suspense to keep me reading, but there wasn't a point where it was too overwhelming.

All in all, not as good as the first in the series but better than the third and worth the read.


Disappointing! submitted by Susan C on August 24, 2014, 7:45am Divergent was so fun. What happened? Depressed girl, with no honor. What's the point?

Insurgent submitted by SBNB on July 13, 2015, 7:12pm It’s a good book. Divergent is better, but it’s definitely not as bad as some of the reviews I read on the internet.

Not a great sequel submitted by Merlin800 on June 20, 2016, 5:03pm Disappointing sequel to Divergent. It wasn't nearly as good, and the characters were ick.

Insurgent submitted by lauradu_palmer on July 12, 2016, 9:21pm This plot is not as enticing and engaging as the first book

Good submitted by ge5935 on June 27, 2018, 8:37am This book was definitely not as good as the first one, Divergent, but it was still better than many other books I have read.

Dissapointing submitted by dragon_rider13 on July 30, 2018, 5:26pm This is defiantly the worst book in the Divergent series. :(

way better then the movie submitted by irvin.linda on August 5, 2018, 7:53pm the book was good. it was interesting, action packed and full of energy. the movie on the other hand left something to be desired, but that's another review.

Ridiculous submitted by lstorc on August 28, 2018, 12:49am The premise is ridiculous even considering that it's speculative literature.

Insurgent submitted by Varshini on July 20, 2019, 7:32pm I actually really liked this book. Sure, maybe Divergent was better, but I think it’s definitely better than Allegiant.

GREAT submitted by sbeegees on August 6, 2019, 12:07pm An amazing sequel to Duvergent and second book in the trilogy

Great submitted by eliadler on July 16, 2020, 10:41am This is a really good book, but not as good as the first one in the series. You can never guess what is going to happen next and it is a very worthwhile read. 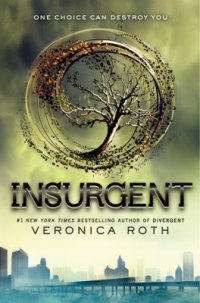