This isn't your ordinary cliche super-hero movie. This movie was packed with emotion, amazing animation. The movie/plot was unexpected. This is a movie worth watching. Personally, I enjoyed it more than HTTYD 2.


Lovely submitted by chioma on June 13, 2015, 6:12pm This movie is so cute and sweet, and if you don't already love baymax, you will by the end. This movie, is amazing and you haven't lived until your eyes have watched it.

fantastic submitted by mbleed on June 16, 2015, 7:39am This movie is wonderful for all agaes and can be watched again and again with delight

GREAT submitted by jessicazhang on June 16, 2015, 3:18pm loved this movie sooo much. One of my all time favorites. A great family movie, cute, and sweet. It completely deserved all the awards it earned.

Yay submitted by kzheng on June 17, 2015, 6:22pm A great movie about when technology runs wild, anything can happen. Hiro, a 13 year old genius, must work with baymax, a robot his brother made to bing light to his brothers death and a mysterious man in a kabuki mask.

Great family movie submitted by wendylv on July 29, 2015, 9:16pm It was darker than we expected but very creative and entertaining.

Inventions abound submitted by kjshaffer on August 9, 2015, 11:50am This movie is great. The inventions are really smart and keep you interested

A+ submitted by hduke on June 28, 2016, 5:37pm I loved this movie so much. It was really well done and it made me laugh out loud multiple times, something I don't normally do while watching movies by myself. I loved it so much that I'm really considering buying a copy for my personal library and I can't think of a higher recommendation than that :)

Love it submitted by cowmooflage on June 30, 2016, 9:15am Awesome movie. Very underrated. Even worth rewatching

so fun! submitted by i'm a blobfish on June 30, 2016, 8:34pm I really liked this 1 of the kind movie. featuring a little kid with a big brain and a robot that was created by his brother. His brother dies in a fire trying to rescue someone and the kid's "New" invention is stolen. He and his "nerd" friends start improving their inventions. find out the rest yourself!

Great submitted by wgregory on July 3, 2016, 11:39am Great family movie with a touch on innovation, science, friendship, and helping others.

Great film submitted by gina.rahl on July 10, 2016, 6:42pm One of the best fully digitally animated films to come out in a long time. Presents you with feels. Well done.

Heartfelt submitted by mrajraspn08 on August 16, 2016, 10:34am The movie itself was just okay for me, but it is completely worth watching just for its accurate and emotional portrayal of depression.

Underrated submitted by Duette on August 26, 2016, 9:05pm Wow. What a pleasure to watch as an adult with my toddler! FYI might be a lil scary for some toddlers

Enjoyable submitted by purchasingqueen on August 31, 2016, 9:31pm I was not familiar with the character but enjoyed the film.

All Ages Fun submitted by jmb.mlis on June 17, 2017, 6:04pm Fun for the whole family (though very little ones may find a few scenes scary).

Adventure Awaits submitted by avrogers1 on June 19, 2017, 12:20pm Follow a kid who has lost a brother as he embarks on a journey that will bring him closer to his brother than he ever thought possible. This movie is filled with adventure and fun lovable characters that bring a comedic relief to a more serious story. Watch as this band of friends are brought together by an unlikely invention left behind by the leads brother sends this group on a n adventure to save their town.

Health submitted by alleywater on July 3, 2017, 10:18pm A story about loss and finding life after it.

Underrated Animation Masterpiece submitted by Meginator on July 21, 2017, 8:34pm Big Hero 6 is a fantastic film with a lot of depth, and it deserves to be seen as a modern classic. The movie's themes are better geared to teenage and adult audiences than those of many animated films, but the emotional payoff is well worth it. The film has a perfect blend of comedy, action, and emotional resonance and watching it is a rewarding experience at all levels.

Great Movie submitted by mbsymes on June 17, 2018, 10:54pm Fun movie for all ages that even a bunch of college students can enjoy.

Good movie submitted by cbrewster on July 2, 2018, 6:39pm It was more emotional than I thought it was. But I had originally not wanted to see the movie, but left glad that I had.

Good submitted by liyifangsv on July 9, 2018, 3:43pm Good movie for the whole family

Great movie submitted by Smiles on July 13, 2018, 1:09am I honestly loved this movie so much! It is one of my favorite movies that Disney has produced and it is a great movie for both kids and adults! Would highly recommend :)

Great submitted by Team_ROX on July 22, 2018, 8:45am We loved this movie. I want a Baymax! Great story with fun characters and fun action scenes. Disney does it again.

Very Touching submitted by majean on August 17, 2018, 8:57pm I was surprised how touching this movie was.

Exciting, fun and touching movie submitted by timdufresne on August 22, 2018, 8:27am These fun and wacky super heroics are supported by a touching story of friendship and family.

Good for school age kids submitted by keldan315 on August 25, 2018, 2:37pm I wouldn't recommend this film for children under 8. It deals with some heavy emotional trauma and has some violence.

Great Movie submitted by kelmu on August 26, 2018, 4:04pm Fun and surprisingly touching. It's based off a Marvel property, but it doesn't rely on other movies in any way, so you don't need to watch anything to know what's going on. A good movie for the whole family.

Endearing submitted by lstorc on August 27, 2018, 12:13pm This was an emotionally profound enigmatic story. Recommended for all ages


highly recommend submitted by meghantpowell on August 31, 2018, 11:46pm Great family movie. Great music. Great animation. A movie you want to see again and do because it's so well done.

Great submitted by c_zhang on June 29, 2019, 1:18pm One of the best fully digitally animated films to come out in a long time. Made me cry.

Big Hero 6 submitted by Varshini on July 28, 2019, 10:48pm I didn't think I'd like this movie, but I was pleasantly surprised. This movie has a great story with well-built characters. The soundtrack is also great! The ending is a bit sad though. 5/5 stars!

an amazing movie submitted by laurenalysse on August 9, 2019, 11:36am This movie is amazing -- it touches on some very important topics and has a great message. It's worth watching.

action & heart submitted by FordAlpha on August 17, 2019, 10:43am "Big Hero 6" is a great movie overall, with strong themes about how we react to loss and experience grief. The action gets a little too intense and scary for the littlest kids, who also may not be ready to process the heartbreaking loss on which the story turns. Everyone will love Baymax, the cuddly robot healthcare assistant (my favorite comedic scene is when his batteries are running low). A big flaw is that the titular "Big Hero 6" part of the story is really underdone. The other four members of the six (in addition to Hiro Hamada and Baymax) are stock characters who serve as little more than props for Hiro's hero's journey. Baymax himself is by far the most plausible of the fantastic tech developed by the band of young prodigies. Other supporting characters also cry out for more development, particularly Hiro's and Tadashi's aunt. Of course, fleshing out these characters would add to the movie's runtime and slow down the action, which is pretty well paced in terms of alternating intense, heart-pounding sequences with quiet, emotionally affecting moments. The ending echoes that of "The Iron Giant" and many other books and films, with an archetypal act of love and sacrifice. It's no less powerful for having been done before.

Fantastic submitted by O'Eily on August 29, 2019, 9:18pm It was really refreshing to see the main character do some bad choices before realizing and correcting them. It was funny, heartwarming, and everything you should have in a movie.

At least it’s entertaining submitted by amd12 on August 31, 2019, 11:21pm My little guy got hooked on this movie!! He played it on repeat for months

Baymax submitted by VanCancue on August 23, 2021, 8:48pm I loev Baymax and how they all became heroes. I like that part the best and the music immortals. And the one where they fly. The first scene with the nanobot fight is really cool.

Such an underrated film! submitted by amandasaurus on June 17, 2022, 12:39am It’s a shame this didn’t get the recognition it deserves when it came out! It’s such a feel good film and Baymax is absolutely hysterical.

Best Pixar Movie submitted by Bethybeth07 on August 3, 2022, 4:24pm This one takes the cake. It's heartfelt, funny, and innovative. We've watched and rewatched as a family, and it never gets old. 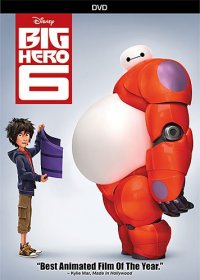