Beneath the Planet of the Apes

Blu-Ray - 2008 Blu-ray Science-Fiction Beneath 2 On Shelf No requests on this item Community Rating: 3.3 out of 5 Charlton Heston.
The sequel to The Planet of the Apes. An astronaut gets thrown through a portal and into the ape planet, where he finds mutated humans in former New York's subway system. Bonus features includes.
Blu-ray, widescreen.
This is a Blu-ray disc and will not play in a standard DVD player.

Good submitted by Chris82 on July 31, 2011, 4:14pm This is the second Planet of the Apes movie. Its not nearly as good as the first one but its still a great old science fiction movie. 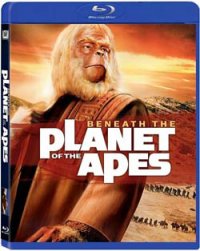