Originally produced as a motion picture under title "Babette's gæstebud" in 1987.
Stephane Audran, Bodil Kjer, Birgitte Federspiel, Jarl Kulle, Jean Philippe Lafont, Bibi Andersson.
With the mysterious arrival of Babette, a refugee from France's civil war, life for two pious sisters and their tiny hamlet begins to change. Before long, Babette has convinced them to try something other than boiled codfish and ale bread-- a gourmet French meal! Her feast scandalizes the elders, except for the visiting General. Just who is this strangely talented Babette, who has terrified this pious town with the prospect of losing their souls for enjoying too much earthly pleasure?
DVD ; all area code,widescreen.

Babette Kicks LIfe in the Behind submitted by erksnerks on July 8, 2011, 8:42am Great movie, reminding me that knowledge of all aspects of religions and cultures is the spice of life.

Slow, but Beautiful submitted by kimberlina on July 26, 2012, 9:11am This movie slowly shares the life of a small village and the change that is brought about by the appearance of Babette. The scenery is beautiful. The message meaningful. Worth watching.

Slow, Quiet, Delicious submitted by Sara W on July 31, 2012, 9:27am This is a gorgeous movie set in tiny village on the coast of Denmark, among a deepy religious family and their small band of aged followers. The father and his two daughters are a tight unit, relying on each other and doing their duty by one another, even when it means denying themselves happiness. Both daughters are lovely and talented and we see the stories of each of their chances for escape - one through love, one through her musical talent. Despite these dalliances, they can never leave their father or their village.

Babette's arrival is abrupt and not well explained. She is like a magical outside figure arriving in their midst, and taking refuge in their kitchen. She serves loyally and dutifully, even when she has a chance to change her situation, she does not. Instead, she gives the sisters something magical and unforgettable, something special and luxurious. She has known success and fame, as the sisters never have, but she gives them a taste of the world, before they all settle back into their everyday simplicity. 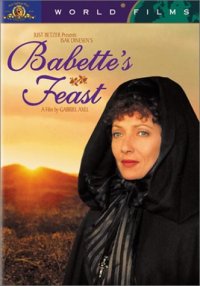