Title from web page.
Originally released as a motion picture in 2016.
Widescreen (2.40:1).
Special features: Improv: Deleted scenes; the creative team; Don't think twice: The art of improv; The commune.
Mike Birbiglia, Keegan-Michael Key, Gillian Jacobs, Kate Micucci, Chris Gethard, Tami Sagher.
For eleven years, the six-person comedy team known as The Commune has killed onstage, waiting for its big break. The team finds itself at a crossroads, when one of the group becomes a solo success and the others start to wonder if they will make it after all.
DVD, region 1, NTSC, widescreen (2.40:1); Dolby digital 5.1.

Great submitted by mmckenzie on June 25, 2017, 2:58pm Well done, can be hard to watch sometimes as it get's emotionally raw.

Captures the ups and downs of improv life submitted by KOH on June 19, 2018, 11:16pm This was a decent portrayal of what the grind of "trying to make it" in comedy looks like. The actors really nailed it (unsurprisingly, since I'm sure this reflected a lot of real life situations). There was a disappointing plot point that didn't seem justified, but overall, I thought this was a really nice mix of comedy, drama, and heart.

It’s about the group submitted by ccrose on August 18, 2019, 9:26pm That’s the mantra for six improv actors, having waited eleven years to get noticed. They’ve built their skills around each other, a package deal.
I was curious about how people learn this skill. It looks like fun. They’re moving up in age, close to 30’s except one guy who’s 50 something. .It wasn’t made well. Nor was the writing done well enough to show off their acting skills. So the punchline for how things turn out for the group is the main dilema with no good answer. No one had a shiny resume, no one had health insurance,
This would be a good movie to watch with friends who have that worry that they’re wasting their lives. No easy or firm answers. But no shame either; if one person grows out of the thrill of being part of a group., do the remaining reconstruct or lose heart?


Friends with jokes submitted by mandevil on December 4, 2021, 2:19pm It’s difficult when a friend gets a big break and everyone is left behind 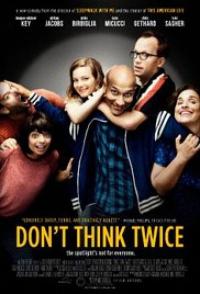 LANGUAGE OPTIONS
English dialogue; French or Spanish subtitles; subtitled for the deaf and hard of hearing.