DVD release of the 2009 motion picture.
Sam Worthington, Zoë Saldana, Giovanni Ribisi, Michelle Rodriguez, Sigourney Weaver, Stephen Lang.
Jake Sully is a former Marine confined to a wheelchair. But despite his broken body, Jake is still a warrior at heart. He is recruited to travel light years to the human outpost on Pandora, where a corporate consortium is mining a rare mineral that is the key to solving Earth's energy crisis. He is given a mission to infiltrate the Na'vi, who have become a major obstacle to mining the precious ore. But a beautiful Na'vi female, Neytiri, saves Jake's life -- which changes everything.
DVD ; widescreen version.

Visually stunning... but that's about it submitted by Daniel Saltzman on April 15, 2010, 3:04pm Avatar, particularly in 3D, was a stunning, beautiful film that has caused many viewers to feel that our world is drab in comparison. But aside from its visual effects and soundtrack, Avatar isn't really that groundbreaking a film, despite its record-setting box office sales. The plot is simple and grossly unoriginal, with multiple plot holes the size of Texas and only a sliver of background information. The characters are mostly one or two-dimensional, their behavior predictable based on their opening lines.

But who cares when there are all these pretty colors? Oooooooooooooh...

Superb submitted by pandangel12 on June 25, 2011, 9:20am A beautiful film in 3D where gready humans try to take over Pandora in order to obtain a rare rock. Beautifully animated and filmed. A+!

Awzome submitted by TripleH123 on June 28, 2011, 10:33pm This is a awsome movie with lots of action and adventure! But it is a little confusing at parts. But overrall an awsome movie!

great movie submitted by jszchen on August 26, 2011, 9:56pm The special effects were awesome

Beautiful submitted by Morgsush on July 1, 2012, 5:59pm A wonderful movie placed in a beautifully rendered world on a different planet. The visuals are just brilliant. Perfect for sci-fi fans, or people that just like pretty colors...

visually brilliant submitted by ftan on July 16, 2012, 9:16pm the visuals and computer work were brilliant along with the costumes, but other than that it was not very good. the plot and acting weren't very good besides zoe saldana.

Amazing submitted by tshapla on August 15, 2012, 11:49am Pandora is beautiful. The movie has a little something for everyone (nature, war love, ect.).

Very well done submitted by Amber Kinder on June 15, 2013, 8:22pm This movie is great. The special effects were awesome.

if not entirely original in terms of themes, still very enjoyable submitted by hathaway1066 on August 3, 2013, 8:52pm Cameron hits the standard themes of abusive corporate powers exploiting native peoples for natural resources--and his characters aren't exactly new and interesting in themselves, but that doesn't really matter as the movie's star is really the special effects that allow creation of an amazingly rich alien world, with complex natural environments and a scale that is breath-taking.


James Cameron is no shlub... submitted by Kikumatsu97 on July 6, 2015, 4:19pm I can't believe there's a better SCi-fi action movie out there, especially if you are considering the concept of imagination alone. The coming of a new age is shown in the parts where the Natives are being compromised by the newcomers and there's so much emotion in those scenes. There's a great display of teamwork and togetherness in the fight against corruption. It's a little violent, and has a kind of a sex scene I couldn't think of my children watching, but it'as not a typical scene of that nature, so maybe could be tolerated. There are negative depictions of the U.S military in this movie, so if you don't like that kind of thing, you might shield the kids. Overall I think this is a very engaging flick, and great for a friday date night in.

Hyped up! submitted by leenajong on August 16, 2015, 9:59pm Watching it again, I couldn't tell this from an animation.

Visually Stunning submitted by gina.rahl on July 10, 2016, 1:04pm Plot is simple, basically a redo of Fern Gully, but it's a fun film.

A pleasure to see again and again submitted by Duette on July 31, 2016, 2:50pm I'm definitely a scifi sort. And the concept and imagery for this film is an instant classic for me in my book.

Makes You Want to be Blue submitted by jmb.mlis on August 19, 2016, 11:09pm Amazing special effects makeup!

Excellent Effects submitted by Meginator on July 3, 2017, 12:00pm The effects in this movie are stunning and showcase James Cameron's greatest talents; this alone, along with the captivating alien setting, makes this film worth watching. Nothing about the story is particularly innovative, but it doesn't really have to be; each science fiction element blends well with the others and the film is unique for that combination. My only major complaint is that the allegory is a touch heavy-handed and the film really bludgeons you with its environmentalist message. Given the continued necessity of that message, though, I can hardly complain too much. "Avatar" remains a compelling, well-made film.

avatar submitted by avrogers1 on August 17, 2017, 12:12am I really enjoyed this movies. It was pure magic! my favorite scene is when the world lights up a night, its soo pretty.

Visually appealing but not a very inspired story submitted by sumsaylor on August 3, 2018, 6:04pm The visuals of this movie were great, but the plot was not great. Visit a bioluminescent bay to see how amazing nature is in real life!

Okay submitted by zmclaugh on August 10, 2018, 7:44pm I couldn't make it through this one. Overhyped, but possibly appealing for some people.

Hmm submitted by anacoluthon on August 18, 2018, 11:40am I like the concept and the animation work that went into it, but it was just your typical "white savior" plot.

Incredible submitted by lstorc on August 28, 2018, 12:30am This is a cinematic gem! The plot and characters are enticing. The cinematography and special effects out of this world!

Bruh submitted by c_zhang on June 28, 2019, 3:56pm I sometimes wonder why this is the highest grossing movie of all time. It's not memorable, and relies on the white savior plot, which is kind of annoying.

Avatar submitted by crp on August 29, 2019, 2:31pm A great movie that unfortunately resorted to using some racist tropes and stereotypes for its creation of the other worldly. Several moments of humour that leave you with good one-liners. As usual, women don't have nearly enough speaking time in this movie, perhaps with the exception of S. Weaver's character.

Transported to another place and time submitted by gem on August 31, 2019, 7:19pm This is a great movie to get you out of your own space and into another place altogether. I thought the effects were amazing! Really worth the watch!

Still a classic submitted by blancharddana on June 21, 2022, 2:15pm Even though it's just Pocahontas in space, it's still a beautiful movie that takes you out of your element. Love the flora and fauna of the plane, hate the capitalist greed. 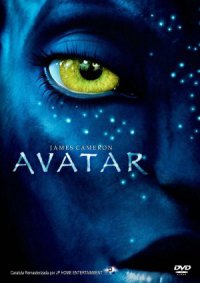 LANGUAGE OPTIONS
In English, dubbed French or dubbed Spanish dialogue, with optional Spanish subtitles ; English subtitles for the deaf and hard of hearing.