Originally released as a motion picture in 1982.
Special features: a special introduction by director Steven Spielberg; exclusive audio track of John Williams' magical score; the reunion: E.T.'s family and friends; behind-the-scenes with composer John Williams.
A story of an alien stranded on Earth and his relationship with a young boy.
DVD, region 1, widescreen presentation; 5.1 surround.

Great submitted by nfrassrand on June 24, 2011, 6:04pm A fun alien twist on the modern world. Funny, and one of my favorites.

E.T. submitted by a2sue on July 23, 2017, 5:53am E.T. is really a kids' movie, but that's OK, I suppose. However, I've always wondered why they made the alien so ridiculously ugly? You'd think they would've make him a little cuter or something, and therefore a bit more appealing to children (as well as more attractive for marketing products bearing his image to children)... 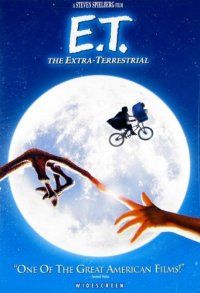