Release date: Nov. 13, 2007.
Killer of sheep originally produced in 1977.
My brother's wedding originally produced in 1983.
Disc 1 bonus features include Charles Burnett's acclaimed short films, Several friends (1969), The horse (1973), and When it rains (1995).
Disc 2 includes the original 1983 version and 2007 director's cut of My brother's wedding and Burnett's newest short film on Hurricane Katrina, Quiet as kept (2007).
Disc 2. My brother's wedding.
Includes Killer of Sheep (a masterpiece of African American filmmaking and one of the finest debuts in history) and My Brother's Wedding (a young man working at his parents' store tries to find himself). Bonus features are included.
DVD, full screen.

film aficionados rejoice submitted by Caser on September 17, 2009, 10:59am The last time I went to the movie theater was over two years ago to see Burnett's Killer of Sheep, for at that time it was difficult to find a copy of the director's film school feature debut, let alone view it on the big screen. I went with a group of friends, none of whom liked this cinema verite study of a very poor African American neighborhood in the 1970s. Some nearly walked out early while others quietly fell asleep. The characters are mostly nameless, the dialogue sparse, and the story plotless. Yet the imagery and sequences are powerful statements on the apalling conditions of the poor in America unlike anything else I've seen in American film, regardless of budget. This film is not for everyone, but those that can finish it will love it. 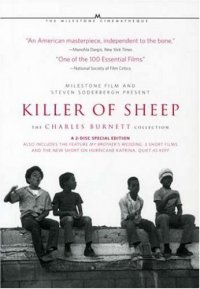