Title from disc surface.
Originally released as a motion picture in 2013.
Special features: first look at new Captain America film ; deleted scene.
Chris Hemsworth, Natalie Portman, Tom Hiddleston.
Thor fights to restore order across the cosmos, but an ancient race led by the vengeful Malekith returns to plunge the universe back into darkness. Faced with an enemy that even Odin and Asgard cannot withstand, Thor must embark on his most perilous and personal journey yet, one that will reunite him with Jane Foster and force him to sacrifice everything to save us all.
DVD, region 1, widescreen.

Thor: The Dark World submitted by mk31 on July 20, 2014, 3:37pm I was very disappointed by the first Thor movie, but this one was even worse. These are the only Marvel movies that I don't like. Would not suggest watching it.

Worth a Watch submitted by dvolpe on August 24, 2014, 2:33pm Not as good as the first Thor in my opinion, but sequels usually aren't. Most of the characters are back in this one, and they all give good performances. The biggest drawback for me is that Malekith the leader of the dark elves is simply not as compelling a villain as Loki. Still, if you were a fan of the first movie, you'll probably enjoy this sequel too.

Good sequel submitted by beeniepie on August 27, 2014, 7:23pm It wasn't as witty as the first, but it was a solid sequel. I enjoyed the attempts at scientific explanation, even though they were way off the mark.

So bad submitted by gina.rahl on July 10, 2016, 3:00pm Tom Hiddleston is the only good thing/actor about this film and he isn't featured.

Worse than the first submitted by toschag on August 4, 2016, 7:07pm The first was okay, this one felt shoehorned in to get Thor ready for The Avengers series.

Interesting! submitted by Xris on June 26, 2018, 12:21am Interesting that Jane can contain the power that she does! Loved when they found the lost keys! And Eccleston does a great job with being a Dark Elf, what with the language and all! Another great Marvel movie!

Forgetful submitted by a2vallem3 on July 30, 2018, 4:27pm I was talking with a friend and we were ranking the Marvel movies and Thor The Dark World was last for me because I literally remembered nothing from it. I remember more from Ant-Man than this one and I forgot that I had even watched that.

Not that good submitted by c_zhang on June 29, 2019, 1:23pm Very forgettable. Probably one of my least favorite movies in the franchise.

A disappointment. submitted by Gloriawhitebellm on September 9, 2019, 2:16pm I was very disappointed while watching this movie, it is bland and the only parts I enjoyed lasted a short time. This movie is a shame to the MCU, although it is a vital movie to watch.

Good sequel, but cannot compare to Thor: Ragnarok submitted by rmhawkins on June 13, 2022, 2:25pm I thought this Thor movie was well done in the context of the first two Thor movies, but then.... Thor: Ragnarok came along for the third movie and became my favorite. Thor: Ragnarok is the best of the three movies in my opinion. 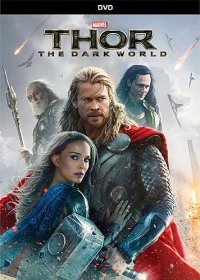