Follows Circe, the banished witch daughter of Helios, as she hones her powers and interacts with famous mythological beings before a conflict with one of the most vengeful Olympians forces her to choose between the worlds of the gods and mortals.

Great! submitted by irksit on June 26, 2018, 1:29pm I loved this story, it was well written and the characters were well developed. I haven’t read any classic Greek literature so I didn’t know much about the stories and characters going into it. I never felt like I was missing anything while reading this book.

Superb submitted by Lucy S on July 2, 2018, 5:39pm I was mesmerized by this re-telling of the Greek Myths surrounding Circe. Many familiar characters made appearances, but what really stood out to me was the humanity that Miller imbued Circe with. Most striking were the parts with Circe as mother, where she seemed not that different from other, mortal moms. Beautifully written!

Circe submitted by treechild on June 21, 2019, 4:44pm Excellent retelling of a classic tale. Loved how deeply each of the characters were thought out. I liked that the author chose a character who isn't a major figure in Greek mythology.

An Incredible Read submitted by italsma on June 27, 2019, 3:25pm A wonderful retelling of a relatively unknown myth. Beautifully written with well rounded characters. A delight to read! Miller's language and talent for character and emotion make this one an instant favorite.

Wonderful submitted by AGAPHD on July 2, 2019, 10:23am This is so beautifully written and brings together a number of familiar stories in a compelling and new narrative. Circe emerges as a wonderfully complex character.

Fantastic take on a familiar story submitted by jaromatorio on July 22, 2019, 11:56am This book was fantastic! It was so fun to read some of the classic tales of Greek mythology told through a new lens.

Like reading chocolate submitted by valeriemates on August 31, 2019, 5:18pm I loved this book, "Circe," by Madeline Miller. It's a retelling of the Greek myths from the point of view of Circe, a goddess-nymph who was exiled to an island in the middle of the ocean, but who still occasionally interacted with other characters in various legends and myths.

Reading this book kept reminding me, oddly, of chocolate. I've never had a book do that before! But it was very textured and satisfying in the way that chocolate is. Also the Suzanne Vega song about Calypso kept running through my head as I read it, even though I know that Circe and Calypso are two different characters -- though with some strong similarities between the two of them. Calypso even is briefly mentioned in this book. I've never had a book so strongly associate itself with a soundtrack while I read it, but I enjoyed having this musical background in my head as I read -- it added to the interestingness of the book. Overall, Circe is a strong female character who I really liked reading about. I highly recommend this book!

Now I want to read everything else that Madeline Miller has written. But the picture of her on the book jacket looks young, and it only mentions one other book of hers, so I may need to wait for her other books to be published before I can read them. Anyway, I do hope that she will write more, because this book was lovely!


Not for me submitted by sueij on June 17, 2020, 8:37pm 2/5 If you don’t know anything about Greek mythology, then I suppose this book will serve some purpose for you, as it is a recently published version of, oh, you know, stories that already exist in a million other versions! But it’s a checklist of what already exists told in ways that were utterly without interest or character, from my viewpoint. I slogged through because it was a book club read, but this was pure tedium. What a waste of my time.

3 or 4 stars submitted by sushai on June 23, 2020, 10:44pm I gave myself some time after finishing the book to think about what I wanted to say about it, but the time didn't help much. I wanted to like the book and the title character more than I did, so my high expectations let me down a bit. I did like the "filling in" of mythological characters and hope/expect for more, but the gods in those myths were all so vengeful and impulsive that it's really hard to like or empathize with any of them. The storytelling was great and I was never bored; I just maybe wanted to be able to relate better to any character.

Unique and interesting submitted by mbleed on July 21, 2020, 12:12pm A very interesting retelling of myths, brought to life.

Good read! submitted by mshivaprasad on July 21, 2020, 12:31pm I loved the story. Would definitely recommend!

Fantastic! submitted by Cihendricks on July 25, 2020, 10:20am This is a really well-written book. The characters are well-developed and the narrative is delightful. I can't recommend this highly enough.

First page turner in a while submitted by labelleh on July 26, 2020, 7:29pm I was reluctant to buy into the massive hype on this book, but when I opened it up, it did not close until I had finished it. Something about Madeleine Miller's prose style is so effortless to read and just glides you through the story. I also had minimal background in Greek Mythology when I started this book, but it got me interested in learning more. This retelling of the story of Circe builds the myth into a narrative about self-actualization in the wake of abuse, abandonment, and exile.

great writing, great plot submitted by zixyxuan on August 13, 2020, 9:14am I've always been a huge Greek Mythology fan, so I really enjoyed this retelling of Circe's story. Madeline Miller has such a captivating way of portraying her characters and writing a beautiful narrative. Throughout the book, she also weaves in other stories in the background, like Theseus and the Minotaur, Jason and Medea, which I also thoroughly enjoyed.

In the end, it was really satisfying to see Circe win the best ending for herself despite being bullied and disregarded her entire life.


I am the outlier submitted by kath on July 17, 2021, 5:42pm I read a great deal of mythology in college. I was looking forward to this book and really wanted to like it. But, I just found it tiresome - like a soap opera. Perhaps I will try again.

So good submitted by nmrhoads on July 24, 2021, 10:47pm I felt like this was a more grown up Percy Jackson. I really liked the stories and the incorporation of Greek heroes

Must read submitted by catlover17 on August 22, 2021, 10:07pm I was reading this book as in “in-between” — I was waiting for a reservation for another book — but I ended up loving this book. As someone who has always enjoyed Greek mythology, I loved how this book put a completely different perspective on stories that I had always been so familiar with. I read this on a Kindle and I think I quoted something from every other page. This is such an exciting read, and the ending was absolutely perfect. 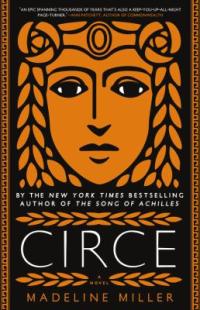