Everything you Love Will Burn : : Inside the Rebirth of White Nationalism in America Introduction: Election Day, 2016 -- The battle of Trenton -- The Little Führer -- The defender of Western civilization -- Kiggy -- The NSM turns forty -- The soldiers of the Earl Turner -- National Kill-a-White-Person Day -- The ANA -- Hammerskins -- Harrisburg -- The suits -- The college boys -- Hail Heimbach -- Postscript: the Hard Right.
Reveals how white supremacist and nationalist groups rose in influence to achieve political support at the highest levels of government, examining the transformation of once-small groups into threatening mainstream organizations.
"Six years ago, Vegas Tenold embedded himself among the members of three of America's most ideologically extreme white nationalist groups--the KKK, the National Socialist Movement, and the Traditionalist Workers Party. At the time, these groups were part of a disorganized counterculture that felt far from the mainstream. But since then, all that has changed. Racially-motivated violence has been on open display at rallies in Charlottesville, Berkeley, Pikesville, Phoenix, and Boston. Membership in white nationalist organizations is rising, and national politicians, including the president, are validating their perceived grievances. Everything You Love Will Burn offers a terrifying, sobering inside look at these newly empowered movements, from their conventions to backroom meetings with Republican operatives. Tenold introduces us to neo-Nazis in Brooklyn; a millennial Klanswoman in Tennessee; and a rising star in the movement, nicknamed the "Little Führer" by the Southern Poverty Law Center, who understands political power and is organizing a grand coalition of far-right groups to bring them into the mainstream. Everything You Love Will Burn takes readers to the dark, paranoid underbelly of America, a world in which the white race is under threat and the enemy is everywhere."--Dust jacket. 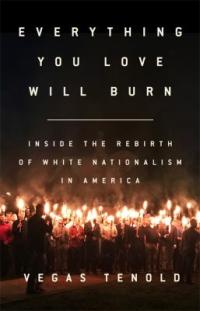