Denmark Vesey's Garden : : Slavery and Memory in the Cradle of the Confederacy "A 150-year reckoning with America's Original Sin" --front cover.
Prelude: Slavery's capital -- Part I: Emancipation and Reconstruction -- The year of jubilee -- Reconstructing Charleston in the shadow of slavery -- Part II: Jim Crow rising -- Setting Jim Crow in stone -- Cradle of the Lost Cause -- Part III: Jim Crow era -- Black memory in the Ivory City -- America's most historic city -- The sounds of slavery -- We don't go in for slave horrors -- Part IV: Civil rights era and beyond -- We shall overcome -- Segregating the past -- Conclusion: Denmark Vesey's garden -- Afterword: The saving grace of the Emanuel nine?
A book that strikes at the heart of the recent flare-ups over Confederate symbols in Charlottesville, New Orleans, and elsewhere, Denmark Vesey's Garden reveals the deep roots of these controversies and traces them to the heart of slavery in the United States: Charleston, South Carolina, where almost half of the U.S. slave population stepped onto our shores, where the first shot at Fort Sumter began the Civil War, and where Dylann Roof shot nine people at Emanuel A.M.E. Church, the congregation of Denmark Vesey, a black revolutionary who plotted a massive slave insurrection in 1822. As early as 1865, former slaveholders and their descendants began working to preserve a romanticized memory of the antebellum South. In contrast, former slaves, their descendants, and some white allies have worked to preserve an honest, unvarnished account of slavery as the cruel system it was. Examining public rituals, controversial monuments, and whitewashed historical tourism, Denmark Vesey's Garden tracks these two rival memories from the Civil War all the way to contemporary times, where two segregated tourism industries still reflect these opposing impressions of the past, exposing a hidden dimension of America's deep racial divide. Denmark Vesey's Garden joins the small bookshelf of major, paradigm-shifting new interpretations of slavery's enduring legacy in the United States. --inside jacket. 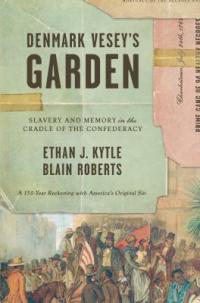