The Poisoned City : : Flint's Water and the American Urban Tragedy Structured like a novel ? submitted by dntanzer on August 27, 2018, 10:01am Firstly, I appreciate that readers can learn about the Flint water crisis through this book. It's important to understand what's happening right now. But I didn't like the set-up/execution of this book.

This book uses flowery quotes throughout every single chapter of this book. The juxtaposition of quotes from Homer and Thoreau with chapter titles like "Divintation", "Water's Perfect Memory" and "Alchemy" really solidified my feeling that I was reading a work of fiction.

And here are a few examples of the way Clark to describes scenes:
"Men in jewel-toned ties grinned and held their clear plastic cups high." (13)
"The old alchemists believed lead could be spun into gold. [...] Back then, there was scarcely a difference between wizardry and science." (82)
"In the leafy college town of Ann Arbor, at the headquarters of Michigan Radio, someone was watching." (117)
"The wheel turned. Flint entered a new year. Nights came early and stayed late. People switched on their lamps and stayed home in the warmth." (166)
"The Flint River shone, as bright as if it were its own source of light. Trees tiled toward their own reflections, their leaves thick with shades of green tha can be found only in late August. (195)

These flowery lines took me away from the facts Clark was trying to present. To me, scientific and non-fiction writing shouldn't be flowery. It should present the case as it is so as not to distance readers from the reality of the situation. There were also a few cases of where Clark used flowery writing in a way that dampened the point she was trying to make. For example, Clark says, "In an echo of how women once ingested lead to control their reproduction, an estimated 275 fewer children were born than expeceted during the emergency." (7) This line, to me, did not sound as harsh as the reality is - women are being poisoned with lead against their knowledge or consent in Flint, which has severely impacted their health and control over their bodies. The comparison to women using lead "willingly" made it feel less severe. Clark also doesn't expand upon this example, doesn't say that the women who ingested lead "willingly" felt they had no other options or even that they also experienced the very negative side effects of ingesting lead. Clark then goes on to list side effects of the water crisis - including children growing sick and people dying from disease, which she follows by saying that the distrust in the government was one the worst side effects. Yes, it's awful not being able to trust the government, but I found it tasteless to put distrust on the same level of severity as death.

Overall, I had too many uncomfortable moments with this writing. I wanted this to present the reality of Flint's water crisis, but instead felt as though Clark was a novelist, focusing on how her writing sounded as opposed to the actual issue she was presenting.

That said, I'm glad that others are able to read and learn from this piece. And I hope that the distancing I felt is less prevalent for those who use this book to learn more about the current situation.

Had to rant about the situation on FB! submitted by Xris on September 13, 2018, 11:43pm This book got me upset and fired up about the problems in America, in Michigan, and in Flint. I had to rant on Facebook about it, it was making me so mad! I hope that people take this book's epilogue to heart and find a way to include everyone and change our infrastructure for the better. :)

oddly unsettling submitted by camelsamba on July 13, 2019, 8:16pm When we arrived at our vacation rental on Drummond Island summer 2018, there were signs by both sinks along the lines of: "Don't drink the water. Drinking water provided." We never got a straight answer as to whether/how the water was dangerous, and it was stressful ("they say it's okay for cooking, but should we use the bottled water to cook this pasta? Is it safe to wash dishes since they'll air dry?" etc etc). We went through 3 cases of water in a week, plus the La Croix we'd brought from home in case the water tasted bad. It really drove home to me just how stressful it must be to live in Flint, to *know* the water is toxic, to have to worry all day every day.

It was oddly unsettling to be listening to this while also hearing retrospective stories on Michigan Radio, concerning the 5 year anniversary of the water switch. I got so angry hearing how state officials were so dismissive of data put in front of them. And even the EPA! "Is this the kind of city we want to help? What if others ask for help?" Argh!!

(Aside: I listened to this as an audiobook, and it was clear that the reader had never heard Rick Snyder speak. She kept deepening her voice for him, rather than channeling his nasally higher-pitched voice.) 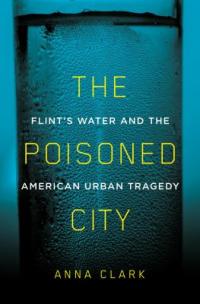