Title from disc surface.
Created by Phoebe-Waller-Bridge.
Based on the novellas by Luke Jennings.
Bonus features: Villanelle's first hit in Tuscany ; the MI6 team ; the Locations ; Creating Villanelle's world ; Eve and Villanelle ; Eve's obsession ; Art of the kill ; Creating the show.
Sandra Oh, Jodie Comer, Fiona Shaw, Kim Bodnia.
Eve is a bored, whip-smart, pay-grade MI5 security officer whose deskbound job doesn't fulfill her fantasies of being a spy. Villanelle is a mercurial, talented killer who clings to the luxuries her violent job affords her. Follow these two women, equally obsessed with each other, as they go head to head in an epic game of cat and mouse.
DVD, Region 1 NTSC, 16:9 anamorphic widescreen; Dolby Digital 5.1; color.
Contents: Codename Villanelle.

Killing Eve submitted by lstorc on July 28, 2019, 7:52pm Killing Eve is sensational! This us an epic Sherlockian cat and mouse suspense ride with whitty comedy throughout.

Unpredictable submitted by downing on August 25, 2019, 9:48am I found killing Eve after searching for projects by the actress and creator of Amazon's Fleabag (dark comedy). The tone is similar. But this show is so much fun to watch. I love constantly being surprised. It's great, quirky, disturbing storytelling.

Leading Ladies submitted by caburr47 on July 3, 2020, 8:50am Sandra Oh and Jodie Comer are phenomenal. You really are invested and interested in the characters from the jump and you really want to know where they go - when two women become obsessed with each other for very different reasons.

Thrilling !! submitted by dntanzer on July 18, 2020, 2:13pm The acting in this show is amazing and brings a refreshing look at a spy thriller. It's better to go in without knowing too much and just seeing where this season takes you. 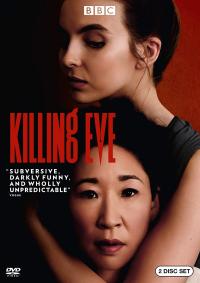