Title from web page.
Anamorphic wide screen (2.39:1).
Originally released as a motion picture in 2019.
Special features: 8 deleted & extended scenes including an alternate ending; Game, sets, match - how the rooms were created; The lone survivors featuring cast and crew; and more!
Taylor Russell, Logan Miller, Deborah Ann Woll, Jay Ellis, Tyler Labine.
An intriguing invitation brings six strangers together. Initially, they think they have gathered for a highly immersive escape room, but they soon make the sickening discovery that they are pawns in a sadistic game of life and death. Together, they move from one terrifying scenario to the next as they find clues and solve puzzles. But the players soon learn that exposing their darkest secrets may hold the key to survive.
DVD, region 1, anamorphic wide screen (2.39:1) presentation; 5.1 Dolby digital; described video. 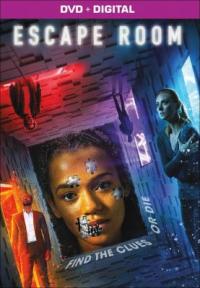