Epidemics and Society : : From the Black Death to the Present Introduction -- Humoral medicine : the legacy of Hippocrates and Galen -- Overview of the three plague pandemics : 541 to ca. 1950 -- Plague as a disease -- Responses to plague -- Smallpox before Edward Jenner -- The historical impact of smallpox -- War and disease : Napoleon, yellow fever, and the Haitian Revolution -- War and disease : Napoleon, dysentery, and typhus in Russia, 1812 -- The Paris School of Medicine -- The sanitary movement -- The germ theory of disease -- Cholera -- Tuberculosis in the romantic era of consumption -- Tuberculosis in the unromantic era of contagion -- The third plague pandemic : Hong Kong and Bombay -- Malaria and Sardinia : uses and abuses of history -- Polio and the problem of eradication -- HIV/AIDS : an introduction and the case of South Africa -- HIV/AIDS : the experience of the United States -- Emerging and reemerging diseases -- Dress rehearsals for the twenty-first century : SARS and Ebola.
"A wide-ranging study that illuminates the connection between epidemic diseases and societal change, from the Black Death to Ebola. This sweeping exploration of the impact of epidemic diseases looks at how mass infectious outbreaks have shaped society, from the Black Death to today. In a clear and accessible style, Frank M. Snowden reveals the ways that diseases have not only influenced medical science and public health, but also transformed the arts, religion, intellectual history, and warfare. A multidisciplinary and comparative investigation of the medical and social history of the major epidemics, this volume touches on themes such as the evolution of medical therapy, plague literature, poverty, the environment, and mass hysteria. In addition to providing historical perspective on diseases such as smallpox, cholera, and tuberculosis, Snowden examines the fallout from recent epidemics such as HIV/AIDS, SARS, and Ebola and the question of the world's preparedness for the next generation of diseases."-- Book jacket. 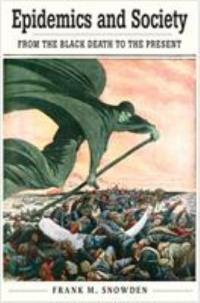