"A romance writer who no longer believes in love and a literary writer stuck in a rut engage in a summer-long challenge that may just upend everything they believe about happily ever afters. Augustus Everett is an acclaimed author of literary fiction. January Andrews writes bestselling romance. When she pens a happily ever after, he kills off his entire cast. They're polar opposites. In fact, the only thing they have in common is that for the next three months, they're living in neighboring beach houses, broke, and bogged down with writer's block. Until, one hazy evening, one thing leads to another and they strike a deal designed to force them out of their creative ruts: Augustus will spend the summer writing something happy, and January will pen the next Great American Novel. She'll take him on field trips worthy of any rom-com montage, and he'll take her to interview surviving members of a backwoods death cult (obviously). Everyone will finish a book and no one will fall in love. But as the summer stretches on, January discovers a gaping plot hole in the story she's been telling herself about her own life, and begins to wonder what other things she might have gotten wrong, including her ideas about the man next door"-- Provided by publisher.

Writer's Block submitted by pamhockey25 on June 25, 2021, 3:03pm What happens when a rom-com writer no longer believes in HEA and a literary writer is stuck in a rut? What happens if they make a bet that they can write the other genre if only to break out of their writer's block? I really enjoyed that book takes place in Michigan, and is partially based on a real-life event. I've already read this book twice and will probably read it again.

Perfect summer read submitted by A2AE on June 29, 2021, 6:42am This is such a fun book to read, especially as a Michigander. I especially like that it’s a romance novel that has depth beyond the blooming relationship between the two writers and neighbors in the Lake Michigan beach town. There is great pacing and satisfying resolution (and it avoided contrived conflict at the end that many other romance novels suffer from). A great beach read worth reading each summer.

Easy Read submitted by cindygeer on June 29, 2021, 9:11am Obviously this is an easy beach read but it did take some time for me to get into it. Narrator's problems really didn't seem like a big deal when the other character's described theirs. It was almost annoying at times. The book does take place in Michigan and they mention U of M so many times.

The setting on Lake Michigan didn't save it. submitted by kkjammers on September 21, 2021, 3:25pm Henry tells this story from January's point of view, and readers will learn, in depth, about all her self-doubt, her questioning her own existence and place in the world, and how overwhelming and often physically manifested her feelings are. This book reinforced my discovery that "light-hearted romances" are incongruent with my literary preferences. Henry's book is for people who don't want to think too much and enjoy, or at least don't mind the details of, January and Gus' lovemaking. So much heat and aching. I found much of the writing to be over-used expressions and soon grew tired of reading about Gus' sharp jawline, the corners of his mouth, olive skin and how he leans on things rather than stands. January arching her back and experiencing her emotions through how her stomach felt became silly. P. 231: "...his T-shirt was creased like a piece of ancient parchment behind glass at a museum..." was one of the most forced similes I have ever read. P. 242: "He lightly held my hips and eased them up to his, and heat raced down me like flames on a streak of gasoline" - also noteworthy. The plot comes full circle and may be satisfying for some readers, but I was left incredulous that I didn't abandon this book sooner. 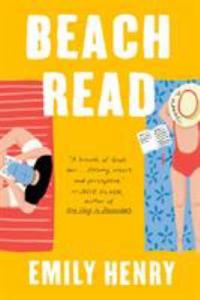