"Longtime Jeopardy! host and television icon Alex Trebek reflects on his life and career"--Dust jacket.
"Since debuting as the host of Jeopardy! in 1984, Alex Trebek has been something like a family member to millions of television viewers, bringing entertainment and education into their homes five nights a week. Last year, he made the stunning announcement that he had been diagnosed with stage four pancreatic cancer. What followed was an incredible outpouring of love and kindness. Social media was flooded with messages of support, and the Jeopardy! studio received boxes of cards and letters offering guidance, encouragement, and prayers. For over three decades, Trebek had resisted countless appeals to write a book about his life. Yet he was moved so much by all the goodwill, he felt compelled to finally share his story. "I want people to know a little more about the person they have been cheering on for the past year," he writes in [this book]. The book combines illuminating personal anecdotes with Trebek's thoughts on a range of topics, including marriage, parenthood, education, success, spirituality, and philanthropy. Trebek also addresses the questions he gets asked most often by Jeopardy! fans, such as what prompted him to shave his signature mustache, his insights on legendary players like Ken Jennings and James Holzhauer, and his opinion of Will Ferrell's Saturday Night Live impersonation. The book uses a novel structure inspired by Jeopardy!, with each chapter title in the form of a question, and features dozens of never-before-seen photos that candidly capture Trebek over the years" -- publisher's description.

What is-A Fun Way To Get To Know Alex Trebek submitted by debacker on June 22, 2021, 8:14pm I really enjoyed reading “The Answer Is,” as it felt like a impromptu conversation with Alex Trebek. Each chapter is titled in the form of a question similar to what one would see on Jeopardy. The chapters are concise yet provide a clear and colorful picture for the reader. Trebek shares stories from his childhood and continues with the road he took in schooling and his career choices. He covers his thoughts on his marriages, children, philanthropy, and basically what was important to him. I appreciated that he highlighted several past players and how they stood out to him, it was an entertaining read and when I finished the book it made me wish he was still here. I think this book should be a must read for any fan of Alex Trebek or Jeopardy.

The Answer Is... submitted by pamhockey25 on August 13, 2021, 11:12am Alex Trebeck! Alex wrote this book after his diagnosis and I found his recollections and stories entertaining and interesting. He lived an fascinating life and his character comes through in this book. I loved the set up of the book which asks a question at the beginning of each chapter and then goes into his thoughts and memories. If you enjoyed Jeopardy, I would whole-heartedly recommend this book! 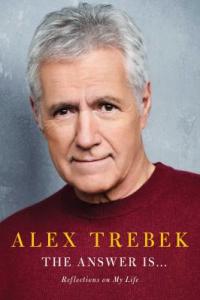