One cut of the Dead Avoid All Spoilers Before Watching! It's Great, I Promise! submitted by Meginator on August 27, 2022, 7:07pm Content Note: The film employs bucketfuls of blood, but it is otherwise light on the gore (particularly given that it is a zombie story).

I *highly* recommend that anyone interested in viewing this film actively avoid spoilers; I’m generally fairly sanguine (yep) about spoilers, but I’m incredibly glad that I didn’t know what was coming and this ignorance greatly improved my experience. As for the film itself, it brilliantly employs and subverts a somewhat predictable trope, asking questions along the way about what it means to make art while facing adversity. Okay, so it’s probably not that deep, but is *is* a mesmerizing technical achievement that transcends the genre and offers a lot of surprises. Very funny but not skimping on the horror elements, this film is an absolute delight. 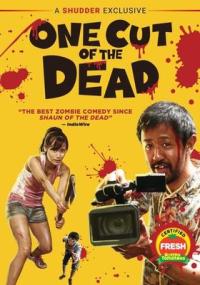