Based on Where are you going, where have you been by Joyce Carol Oates.
Originally released as a motion picture in 1985.
Wide screen (1.85:1).
Treat Williams, Laura Dern, Mary Kay Place, Margaret Welsh, Sara Inglis, Levon Helm, Elizabeth Berridge.
The fifteen-year-old black sheep of her family whose summertime idyll of beach trips, mall hangouts, and innocent flirtations is shattered by an encounter with a mysterious stranger Winner of the Grand Jury Prize at Sundance, it captures the thrill and terror of adolescent sexual exploration as it transforms the conventions of a coming-of-age story into something altogether more troubling and profound.
DVD, wide screen (1.85:1); monaural.
Contents: Where are you going, where have you been?

Beautiful and haunting submitted by manz on December 22, 2021, 1:41pm A young Laura Dern perfectly portrays Connie. The film is sparse and beautiful, and you really hope it doesn't go where you think it's going to go. - 5 Stars. 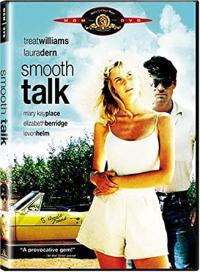