"This is a Borzoi book"--Title page.
The year is 1969, and the Bayleen Island Folk Fest is abuzz with one name: Jesse Reid. Jesse Reid's intricate guitar riffs and supple baritone are poised to tip from fame to legend with this one headlining performance. That is, until his motorcycle crashes on the way to the show. Jane Quinn is a Bayleen Island local whose music flows as naturally as her long blond hair. When she and her bandmates are asked to play in Jesse Reid's place at the festival, it almost doesn't seem real. But Jane plants her bare feet on the Main Stage and delivers the performance of a lifetime, stopping Jesse's disappointed fans in their tracks: A star is born. Jesse stays on the island to recover from his near-fatal accident and he strikes up a friendship with Jane, coaching her through the production of her first record. As Jane contends with the music industry's sexism, Jesse becomes her advocate, and what starts as a shared calling soon becomes a passionate love affair.
"A scintillating debut from a major new voice in fiction, alive with music, sex, and fame, Songs in Ursa Major is a love story set in 1969 at the crossroads of rock and folk, for fans of Daisy Jones & The Six"-- Provided by publisher. 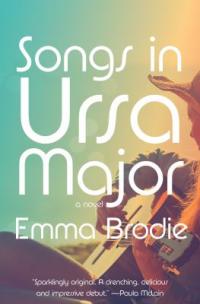