"Janus Films"--Container
"Where is the friend's house?": Originally released as a motion picture in 1987.
"And life goes on": Originally released as a motion picture in 1992.
"Through the olive trees": Originally released as a motion picture in 1994.
"Three-DVD special edition"--Container
Wide screen (1.66:1).
"New 2K digital restorations of all three films ... New English subtitle translations"--Container
Accompanying booklet with essay "Journeys of the heart : Abbas Kiarostami's 'Koker trilogy'" by filmmaker and critic Godfrey Cheshire and cast and crew credits inserted in container.
880-04 [Disc 1]. Khānah-i dust kujāst = Where is the friend's house? / The Institute for the Intellectual Development of Children presents ; screenplay by Abbas Kiarostami ; produced by Ali Reza Zarrin ; directed by Abbas Kiarostami (83 min.) -- [Disc 2]. "Zindigī va dīgar hīch"... = And life goes on / The Institute for the Intellectual Development of Children presents ; a film by Abbas Kiarostami ; produced by Ali Reza Zarrin ; written and directed by Abbas Kiarostami (95 min.) -- [Disc 3]. Zīr darakhatān zaytūn = Through the olive trees / MK2, CiBy Distribution [present] ; a film by Abbas Kiarostami ; written, produced, directed, and edited by Abbas Kiarostami ; [producer, Alain Depardieu] (103 min.).
Special features (disc 1): "Homework" (1989) / a feature-length documentary by Abbas Kiarostami, newly restored -- Conversation from 2015 between Abbas Kiarostami and programmer Peter Scarlet.
Special features (disc 2): New audio commentary on "And life goes on" featuring Mehrnaz Saeed-Vafa and Jonathan Rosenbaum, coauthors of "Abbas Kiarostami" -- "Abbas Kiarostami: truths and dreams" : a 1994 documentary -- New interview with scholar Hamid Naficy.
Special features (disc 3): New interview with Kiarostami's son Ahmad Kiarostami -- New conversation between scholar Jamsheed Akrami and critic Godfrey Cheshire.
"Where is the friend's house?": Babek Ahmadpour, Ahmad Ahmadpour, Khodabakhsh Defai, Iran Outari.
"And life goes on": Farhad Kheradmand, Pouya Payvar, Hossein Rezai.
"Through the olive trees": Mohammad Ali Keshavarz, Farhad Kheradmand, Zarifeh Shiva, Hossein Rezai.
"Abbas Kiarostami first came to international attention for his wondrous, slyly self-referential trilogy of films set in the rural northern-Iranian town of Koker. Poised delicately between fiction and documentary, comedy and tragedy, the lyrical fables in 'The Koker trilogy' exemplify both the gentle humanism and playful sleight of hand that define the director's sensibility."-- Container
"Where is the friend's house?": A boy searches for the home of his classmate, whose school notebook he has accidentally taken--and transforms it into a miraculous child's-eye adventure of the everyday
"And life goes on": In the aftermath of the 1990 earthquake in Iran that left fifty thousand dead, Abbas Kiarostami returned to Koker, where his camera surveys not only devastation but also the teeming life in its wake. Blending fiction and reality into a playful, poignant road movie, the film follows a film director who, along with his son, makes the trek to the region in hopes of finding out if the young boys who acted in "Where is the friend's house?" are among the survivors, and discovers a resilient community pressing on in the face of tragedy.
"Through the olive trees": A depiction of the off-screen relationship between the actors who play the newlyweds in the film "And life goes on." Unfolding behind the scenes, this film traces the complications that arise when the romantic misfortune of one of the actors--a young man who pines for the woman cast as his wife, even though, in real life, she will have nothing to do with him--creates turmoil on set and leaves the hapless director caught in the middle
DVD; NTSC, Region 1; 16:9 widescreen (1.66:1) presentation; Dolby digital mono. 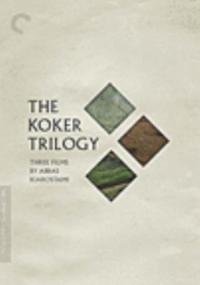