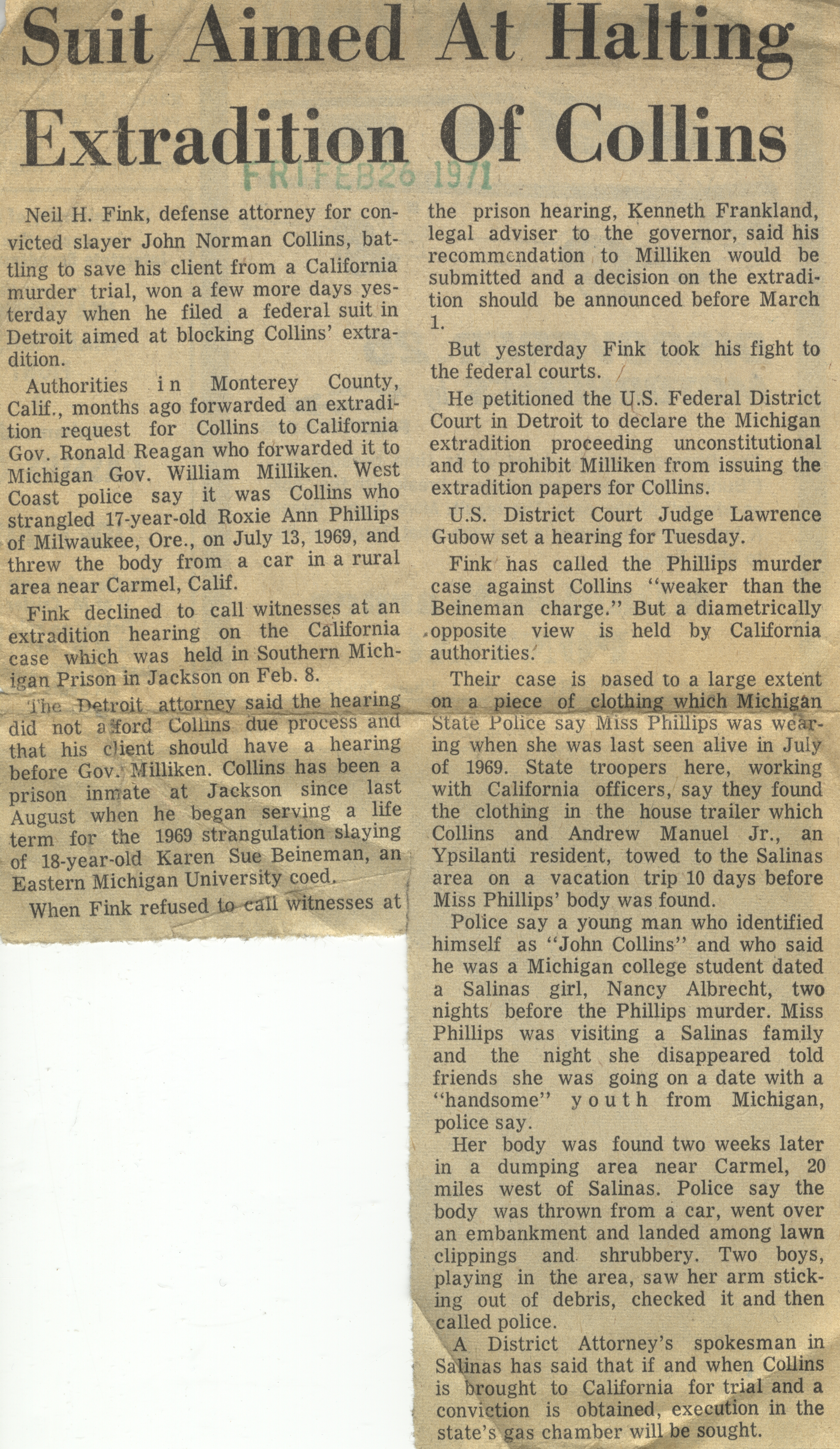 Neil H. Fink, defense attorney for convicted slayer John Norman Collins, battling to save his client from a California murder trial, won a few more days yesterday when he filed a federal suit in Detroit aimed at blocking Collins’ extradition.

Authorities in Monterey County, Calif., months ago forwarded an extradition request for Collins to California Gov. Ronald Reagan who forwarded it to Michigan Gov. William Milliken. West Coast police say it was Collins who strangled 17-year-old Roxie Ann Phillips of Milwaukee, Ore., on July 13, 1969, and threw the body from a car in a rural area near Carmel, Calif.

Fink declined to call witnesses at an extradition hearing on the California case which was held in Southern Michigan Prison in Jackson on Feb. 8.

The Detroit attorney said the hearing did not afford Collins due process and that his client should have a hearing before Gov. Milliken. Collins has been a prison inmate at Jackson since last August when he began serving a life term for the 1969 strangulation slaying of 18-year-old Karen Sue Beineman, an Eastern Michigan University coed.

When Fink refused to call witnesses at the prison hearing, Kenneth Frankland, legal adviser to the governor, said his recommendation to Milliken would be submitted and a decision on the extradition should be announced before March 1.

But yesterday Fink took his fight to the federal courts.

He petitioned the U.S. Federal District Court in Detroit to declare the Michigan extradition proceeding unconstitutional and to prohibit Milliken from issuing the extradition papers for Collins.

Fink has called the Phillips murder case against Collins “weaker than the Beineman charge.” But a diametrically opposite view is held by California authorities.'

Their case is based to a large extent on a piece of clothing which Michigan State Police say Miss Phillips was wearing when she was last seen alive in July of 1969. State troopers here, working with California officers, say they found the clothing in the house trailer which Collins and Andrew Manuel Jr., an Ypsilanti resident, towed to the Salinas area on a vacation trip 10 days before Miss Phillips’ body was found.

Police say a young man who identified himself as “John Collins” and who said he was a Michigan college student dated a Salinas girl, Nancy Albrecht, two nights before the Phillips murder. Miss Phillips was visiting a Salinas family and the night she disappeared told friends she was going on a date with a “handsome” youth from Michigan, police say.

Her body was found two weeks later in a dumping area near Carmel, 20 miles west of Salinas. Police say the body was thrown from a car, went over an embankment and landed among lawn clippings and shrubbery. Two boys, playing in the area, saw her arm sticking out of debris, checked it and then called police.

A District Attorney’s spokesman in Salinas has said that if and when Collins is brought to California for trial and a conviction is obtained, execution in the state’s gas chamber will be sought.