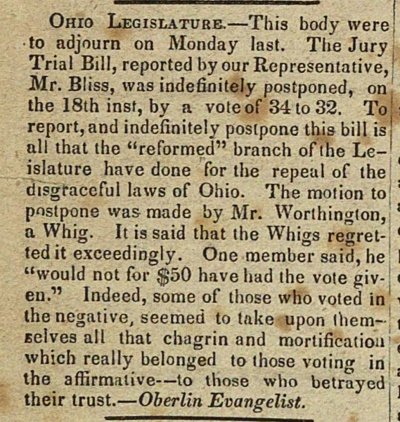 OHIO LEGISLATURE - This body were to adjourn on Monday last. The Jury Trial Bill, reported by our Representative, Mr. Bliss, was indefinitely postponed, on the 18th inst, by a vote of 34 to 32. To report, and indefinitely postpone this bill is all that the "reformed" branch of the Legislature have done for the repeal of the disgraceful laws of Ohio. The motion to postpone was made by Mr. Worthington, a Whig. It is said that the Whigs regretted it exceedingly. One member said, he "would not for $50 have had the vote given." Indeed, some of those who voted in the negative, seemed to take upon themselves all that chagrin and mortification which really belonged to those voting in the affirmative - to those who betrayed their trust. - Oberlin Evangelist