The Anniversary At Jackson 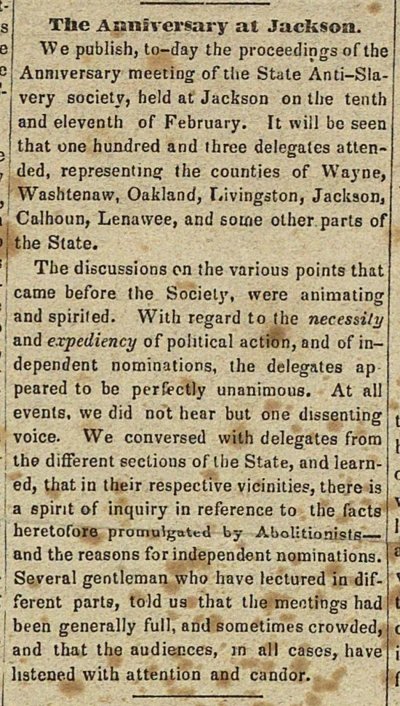 We publish, to-day the proceedings of the Anniversary meeting of the State Anti-Slavery society, held at Jackson on the tenth and eleventh of February. It will be seen that one hundred and three delegates attended, representing the counties of Wayne, Washtenaw, Oakland, Livingston, Jackson, Calhoun, Lenawee, and some other parts of the State.

The discussions on the various points that came before the Society, were animating and spirited. With regard to the necessity and expediency of political action, and of independent nominations, the delegates appeared to be perfectly unanimous. At all events, we did not hear but one dissenting voice. We conversed with delegates from the different sections of the State, and learned, that in their respective vicinities, there is a spirit of inquiry in reference to the facts heretofore promulgated by Abolitionists - and the reasons for independent nominations. Several gentleman who have lectured in different parts, told us that the meetings had been generally full, and sometimes crowded, and that the audiences, in all cases, have listened with attention and candor.