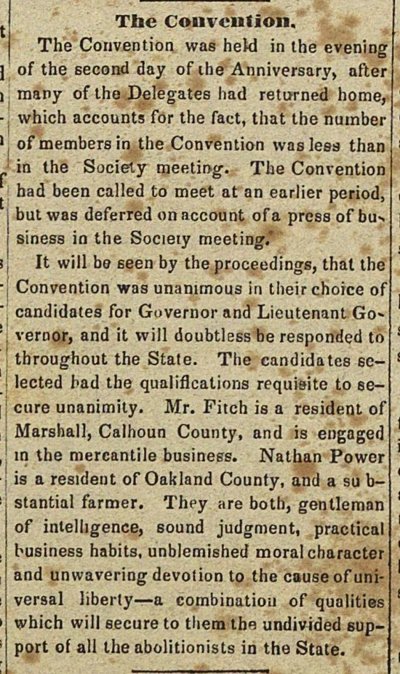 The Convention was held in the evening of the second day of the Anniversary, after many of the Delegates had returned home, which accounts for the fact, that the number of members in the Convention was lees than in the Society meeting. The Convention had been called to meet at an earlier period, but was deferred on account of a press of business in the Society meeting. It will be seen by the proceedings, that the Convention was unanimous in their choice of candidates for Governor and Lieutenant Governor, and it will doubtless be responded to throughout the State. The candidates selected had the qualifications requisite to secure unanimity. Mr. Fitch is a resident of Marshall, Calhoun County, and is engaged in the mercantile business. Nathan Power is a resident of Oakland County, and a substantial farmer. They are both, gentleman of intelligence, sound judgment, practical business habits, unblemished moral character and unwavering devotion to the cause of universal liberty - a combination of qualities which will secure to them the undivided support of all the abolitionists in the State.