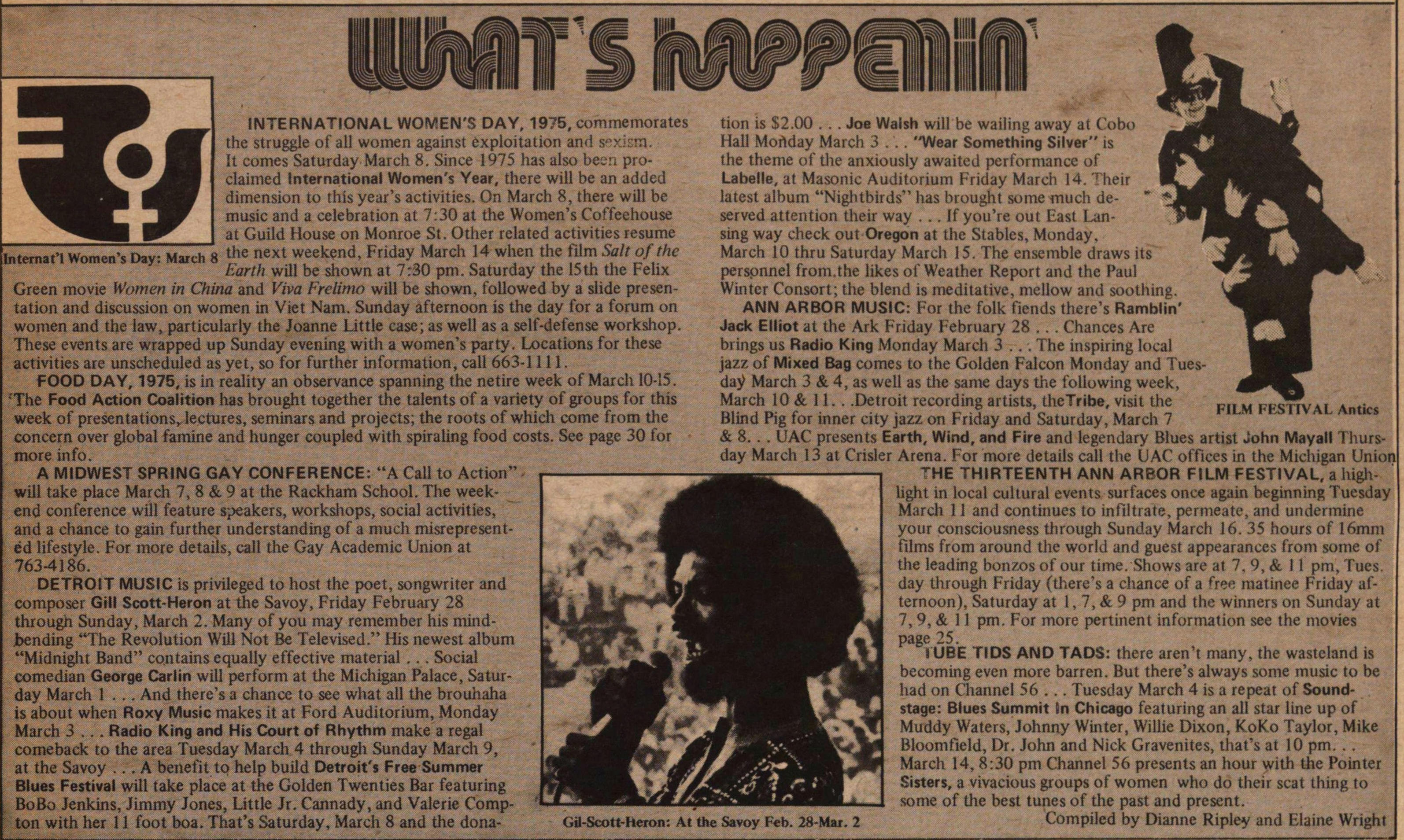 INTERNATIONAL WOMEN'S DAY, 1975, commemorates the struggle of all women against exploitation and sexism. It comes Saturday, March 8. Since 1975 has also been proclaimed International Women's Year, there will be an added dimension to this year's activities. On March 8, there will be music and a celebration at 7:30 at the Women's Coffeehouse at Guild House on Monroe St. Other related activities resume the next weekend, Friday, March 14 when the film Salt of the Earth will be shown at 7:30 pm. Saturday the 15th the Felix Green movie women in China and Viva Frelimo will be shown, followed by a slide presentation and discussion on women in Vietnam. Sunday afternoon is the day for a forum on women and the law, particularly the Joanne Little case; as well as a self-defense workshop. These events are wrapped up Sunday evening with a women's party. Location for these activities are unscheduled as yet, so for further information, call 663-1111.

FOOD DAY, 1975, is in reality an observance spanning the entire week of March 10 - 15. The Food Action Coalition has brought together the talents of a variety of groups for this week of presentations, lectures, seminars and projects; the roots of which come from the concern over global famine and hunger coupled with spiraling food costs. See page 30 for more info.

A MIDWEST SPRING GAY CONFERENCE: "A Call to Action" will take place March 7, 8 & 9 at the Rackham School. The weekend conference will feature speakers, workshops, social activities, and a chance to gain further understanding of a much-misrepresented lifestyle. For more details, call the Gay Academic Union at 763-4186.

DETROIT MUSIC is privileged to hos the poet, songwriter, and composer Gill Scott-Heron at the Savoy, Friday, February 28 through Sunday, March 2. Many of you may remember his mindbending "The Revolution Will Not Be Televised." His newest album "Midnight Band" contains equally effective material... Social comedian George Carlin will perform at the Michigan Palace, Saturday, March 1... And there's a chance to see what all the brouhaha is about when Roxy Music makes it at the Ford Auditorium, Monday, March 3... Radio King and His Court of Rhythm makes a regal comeback to the area Tuesday, March 4 through Sunday, March 9, at the Savoy... A benefit to help build Detroit's Free Summer Blues Festival will take place at the Golden Twenties Bar featuring BoBo Jenkins, Jimmy Jones, Little Jr. Cannady, and Valerie Compton with her 11-foot boa. That's Saturday, March 8 and the donation is $2.00... Joe Walsh will be wailing away at Cobo Hall Monday, March 3... "Wear Something Silver" is the theme of the anxiously awaited performance of Labelle, at Masonic Auditorium Friday march 14. Their latest album "Nightbirds" has brought some much-deserved attention their way... If you're out East Lansing way check out Oregon at the Stables, Monday, March 10 thru Saturday, March 15. The ensemble draws its personnel from the likes of Weather Report and the Paul Winter Consort; the blend is meditative, mellow, and soothing.

THE THIRTEENTH ANN ARBOR FILM FESTIVAL, a highlight in local cultural events surfaces once again beginning Tuesday, March 11 and continues to infiltrate, permeate, and undermine your consciousness through Sunday, March 16. 35 hours of 16mm films from around the world and guest appearances from some of the leading bonzos of our time. Shows are at 7, 9, & 11 pm, Tuesday through Friday (there's a chance of a free matinee Friday afternoon), Saturday at 1, 7, & 9 pm, and the winners on Sunday at 7, 9, & 11 pm. For more pertinent information see the movies page 25.

TUBE TIDS AND TADS: there are many, the wasteland is becoming even more barren. But there's always some music to be had on Channel 56... Tuesday, March 4 is a repeat of Soundstage: Blues Summitt in Chicago featuring an all-start line up of Muddy Waters, Johnny Winter, Willie Dixon, KoKo Taylor, Mike Bloomfield, Dr. John, and Nick Gravenites, that's at 10 pm... March 14, 8:30 pm Channel 56 presents an hour with the Pointer Sisters, a vivacious group of women who do their scat thing to some of the best tunes of the past and present.