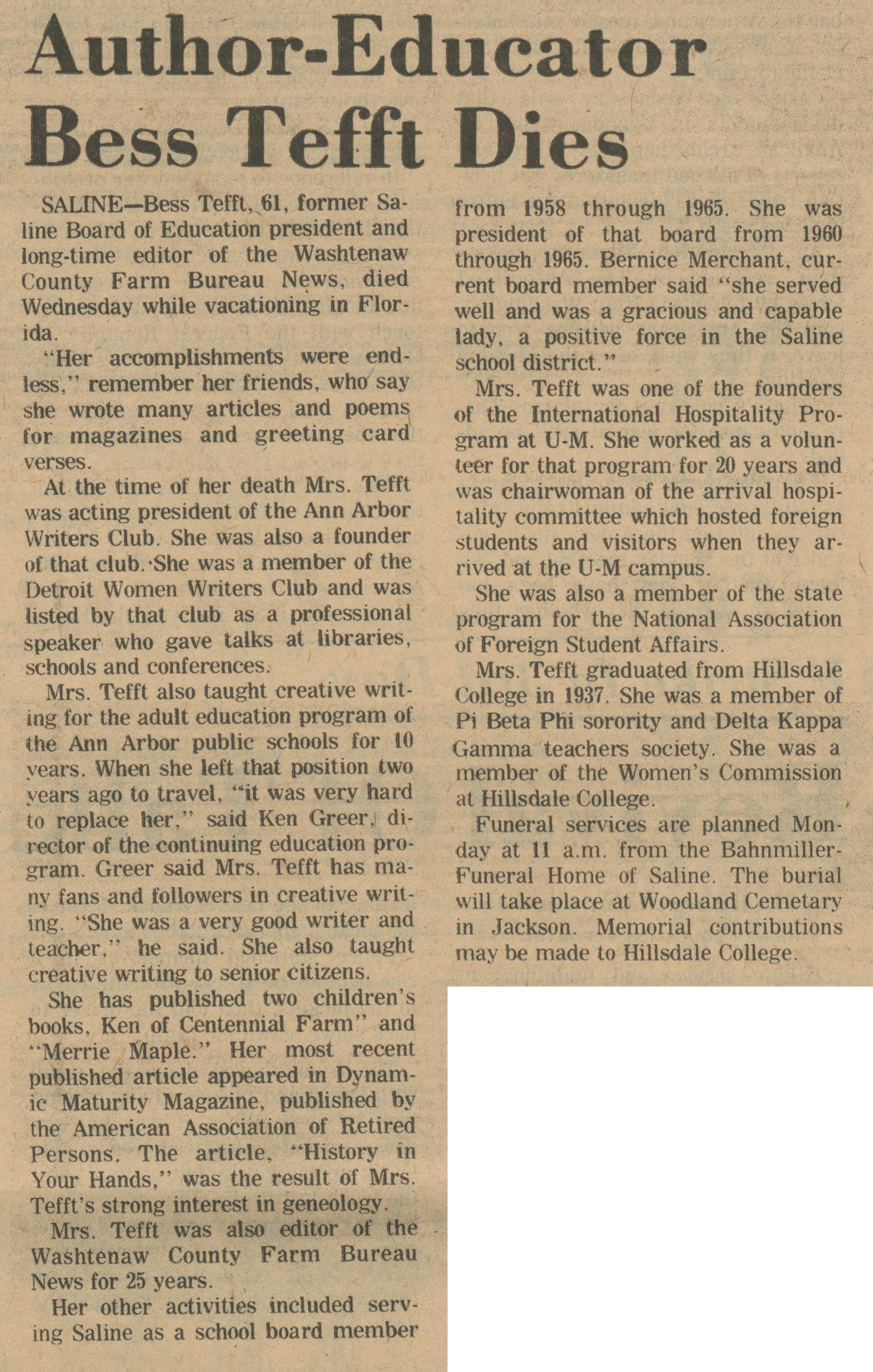 Author-Educator Bess Tefft Dies
SALINE- Bess Tefft, 61, former Saline Board of Education president and long-time editor of the Washtenaw County Farm Bureau News, died Wednesday while vacationing in Florida.
"Her accomplishments were endless," remember her friends, who say she wrote many articles and poems for magazines and greeting card verses.
At the time of her death, Mrs. Tefft was acting president of the Ann Arbor Writers Club. She was also a founder of that club. She was a member of the Detroit Women Writers Club and was listed by that club as a professional speaker who gave talks at libraries, schools and conferences.
Mrs. Tefft also taught creative writing for the adult education program of the Ann Arbor public schools for 10 years. When she left that position two years ago to travel, "it was very hard to replace her," said Ken Greer, director of the continuing education program. Greer said Mrs. Tefft has many fans and followers in creative writing. "She was a very good writer and teacher," he said. She also taught creative writing to senior citizens.
She has published two children's books, "Ken of Centennial Farm" and "Merrie Maple". Her most recent published article appeared in Dynamic Maturity Magazine, published by the American Association of Retired Persons. The article, "History in Your Hands," was the result of Mrs. Tefft's strong interest in genealogy.
Mrs. Tefft was also editor of the Washtenaw County Farm Bureau News for 25 years.
Her other activities included serving Saline as a school board member from 1958 through 1965. She was president of that board from 1960 through 1965. Bernice Merchant, current board member said "she served wll and was a gracious and capable lady, a positive force in the Saline school district."
Mrs. Tefft was one of the founders of the International Hospitality Program at U-M. She worked as a volunteer for that program for 20 years and was chairwoman of the arrival hospitality commitee which hosted foreign students and visitors when they arrived at the U-M campus.
She was also a member of the state program for the National Association of Foreign Student Affairs.
Mrs. Tefft graduated from Hillsdale College in 1937. She was a member of Pi Beta Phi sorority and Delta Kappa Gamma teachers society. She was a member of the Women's Commission at Hillsdale College.
Funeral services are planned Monday at 11 a.m. from the Bahnmiller Funeral Home of Saline. The burial will take place at Woodland Cemetery in Jackson. Memorial contributions may be made to Hillsdale College.