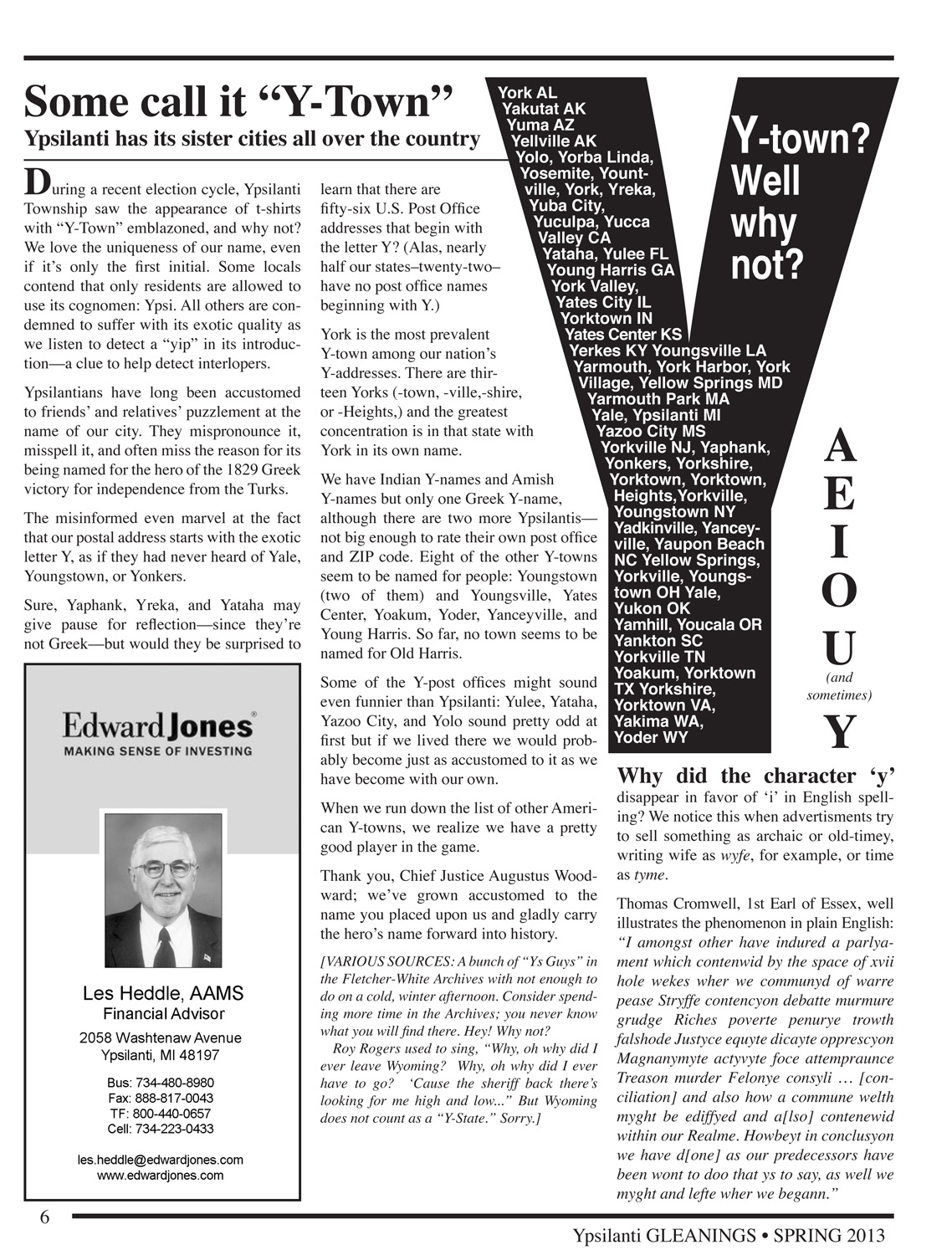 Ypsilanti has its sister cities all over the country
During a recent election cycle, Ypsilanti Township saw the appearance of t-shirts with “Y-Town” emblazoned, and why not? We love the uniqueness of our name, even if it’s only the first initial. Some locals contend that only residents are allowed to use its cognomen: Ypsi. All others are condemned to suffer with its exotic quality as we listen to detect a “yip” in its introduction––a clue to help detect interlopers.

Ypsilantians have long been accustomed to friends’ and relatives’ puzzlement at the name of our city. They mispronounce it, misspell it, and often miss the reason for its being named for the hero of the 1829 Greek victory for independence from the Turks.

The misinformed even marvel at the fact that our postal address starts with the exotic letter Y, as if they had never heard of Yale, Youngstown, or Yonkers.

Sure, Yaphank, Yreka, and Yataha may give pause for reflection––since they’re not Greek––but would they be surprised to learn that there are
fifty-six U.S. Post Office addresses that begin with the letter Y? (Alas, nearly half our states–twenty-two–have no post office names beginning with Y.)

York is the most prevalent Y-town among our nation’s Y-addresses. There are thirteen Yorks (-town, -ville,-shire, or -Heights,) and the greatest
concentration is in that state with York in its own name.

We have Indian Y-names and Amish Y-names but only one Greek Y-name, although there are two more Ypsilantis––not big enough to rate their own post office and ZIP code. Eight of the other Y-towns seem to be named for people: Youngstown (two of them) and Youngsville, Yates Center, Yoakum, Yoder, Yanceyville, and Young Harris. So far, no town seems to be named for Old Harris.

Some of the Y-post offices might sound even funnier than Ypsilanti: Yulee, Yataha, Yazoo City, and Yolo sound pretty odd at first but if we lived there we would probably become just as accustomed to it as we have become with our own.

When we run down the list of other American Y-towns, we realize we have a pretty good player in the game.

Thank you, Chief Justice Augustus Woodward; we’ve grown accustomed to the name you placed upon us and gladly carry the hero’s name forward into history.

[VARIOUS SOURCES: A bunch of “Ys Guys” in the Fletcher-White Archives with not enough to do on a cold, winter afternoon. Consider spending more time in the Archives; you never know what you will find there. Hey! Why not?
Roy Rogers used to sing, “Why, oh why did I ever leave Wyoming? Why, oh why did I ever have to go? ‘Cause the sheriff back there’s looking for me high and low...” But Wyoming does not count as a “Y-State.” Sorry.]

SIDEBAR
A E I O U (and sometimes) Y
Why did the character ‘y’ disappear in favor of ‘i’ in English spelling? We notice this when advertisments try to sell something as archaic or old-timey, writing wife as wyfe, for example, or time as tyme.
Thomas Cromwell, 1st Earl of Essex, well illustrates the phenomenon in plain English:
“I amongst other have indured a parlyament which contenwid by the space of xvii hole wekes wher we communyd of warre pease Stryffe contencyon debatte murmure grudge Riches poverte penurye trowth falshode Justyce equyte dicayte opprescyon Magnanymyte actyvyte foce attempraunce Treason murder Felonye consyli … [conciliation] and also how a commune welth myght be ediffyed and a[lso] contenewid within our Realme. Howbeyt in conclusyon we have d[one] as our predecessors have been wont to doo that ys to say, as well we myght and lefte wher we begann.”