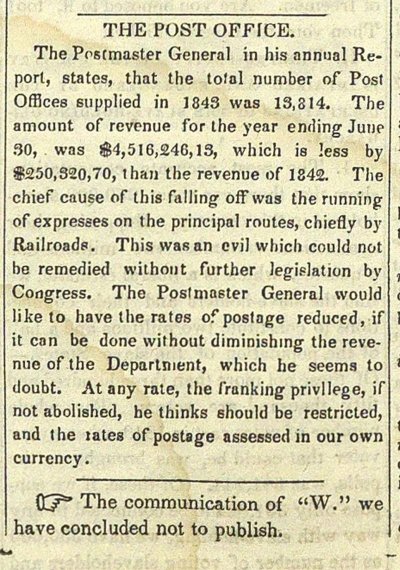 The Postmaster General in his annual Relort, states, that the tofal number of Post Offices supplied in 1843 was 13,314. The amount of revcnue for the year ending June 30, was $4,516,L46,1S, which is less by $250,320,70, than the revenue of 1842. The chief cause of this falling off was the running of expresses on the principal routes, chiefly by lailroads. This wasan evil which could not be remedied without further Jegielation by Congress. The Poslnia6ter General would ike to have the rates ofposlage reduced, if t can be done without diminishing the revenue of the Department, which he seems to doubt. At any rate, the franking privilege, f not abolished, be thinks ehould be restricted, and the lates ofpostsge assessed in our own currency. (t The communication of "W." we aave concluded not to publish.