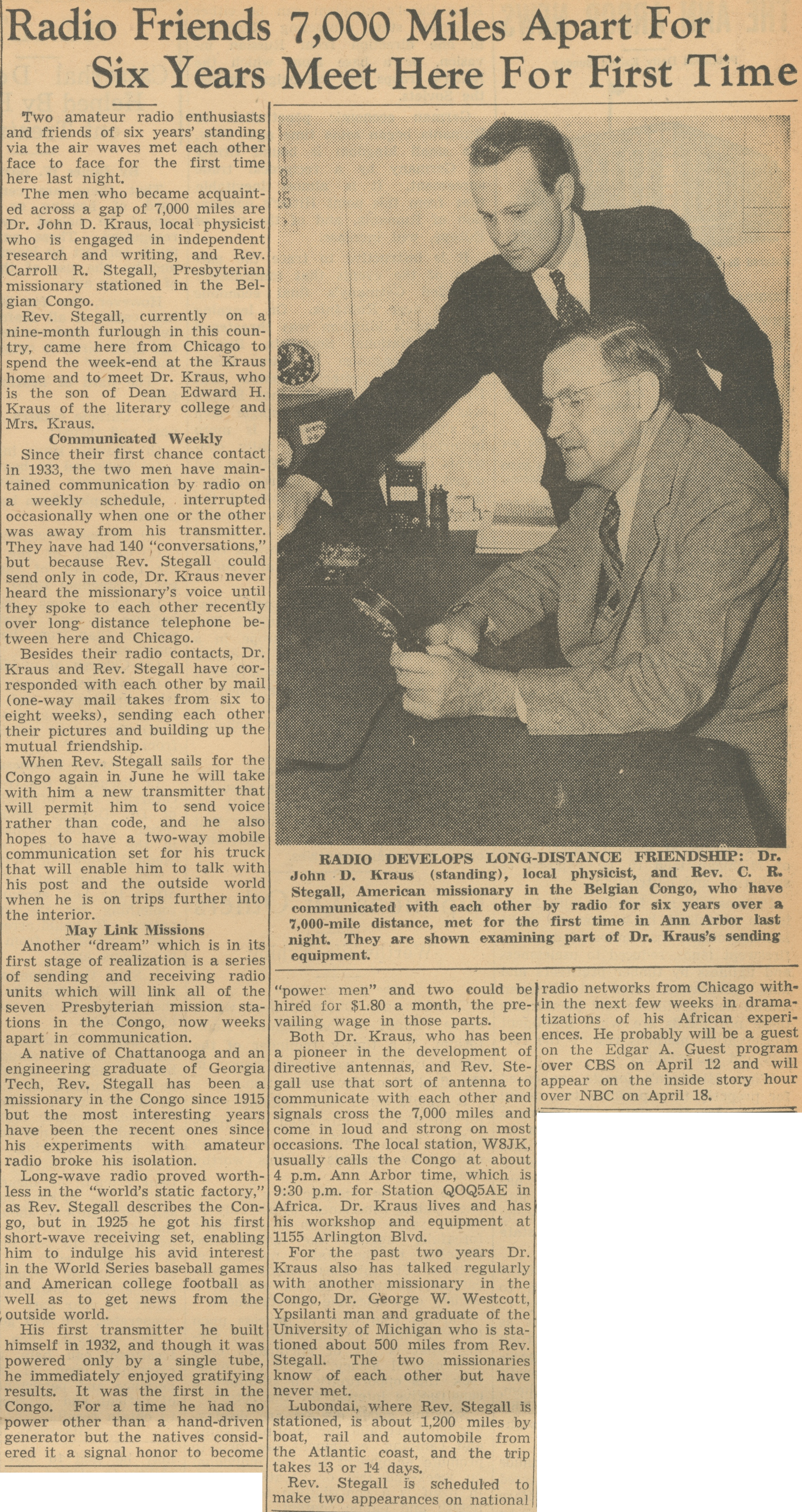 Two amateur radio enthusiasts and friends of six years’ standing via the air waves met each other face to face for the first time here last night.

The men who became acquainted across a gap of 7,000 miles are Dr. John D. Kraus, local physicist who is engaged in independent research and writing, and Rev. Carroll R. Stegall, Presbyterian missionary stationed in the Belgian Congo.

Rev. Stegall, currently on a nine-month furlough in this country, came here from Chicago to spend the week-end at the Kraus home and to meet Dr. Kraus, who is the son of Dean Edward H. Kraus of the literary college and Mrs. Kraus.

Since their first chance contact in 1933, the two men have maintained communication by radio on a weekly schedule, interrupted occasionally when one or the other was away from his transmitter. They have had 140 "conversations,” but because Rev. Stegall could send only in code, Dr. Kraus never heard the missionary’s voice until they spoke to each other recently over long distance telephone between here and Chicago.

Besides their radio contacts, Dr. Kraus and Rev. Stegall have corresponded with each other by mail (one-way mail takes from six to eight weeks), sending each other their pictures and building up the mutual friendship.

When Rev. Stegall sails for the Congo again in June he will take with him a new transmitter that will permit him to send voice rather than code, and he also hopes to have a two-way mobile communication set for his truck that will enable him to talk with his post and the outside world when he is on trips further into the interior.

Another "dream” which is in its first stage of realization is a series of sending and receiving radio units which will link all of the seven Presbyterian mission stations in the Congo, now weeks apart in communication.

A native of Chattanooga and an engineering graduate of Georgia Tech, Rev. Stegall has been a missionary in the Congo since 1915 but the most interesting years have been the recent ones since his experiments with amateur radio broke his isolation.

Long-wave radio proved worthless in the “world’s static factory,” as Rev. Stegall describes the Congo, but in 1925 he got his first short-wave receiving set, enabling him to indulge his avid interest in the World Series baseball games and American college football as well as to get news from the outside world.

His first transmitter he built himself in 1932, and though it was powered only by a single tube, he immediately enjoyed gratifying results. It was the first in the Congo. For a time he had no power other than a hand-driven generator but the natives considered it a signal honor to become "power men” and two could be hire'd for $1.80 a month, the prevailing wage in those parts.

Both Dr. Kraus, who has been a pioneer in the development of directive antennas, and Rev. Stegall use that sort of antenna to communicate with each other and signals cross the 7,000 miles and come in loud and strong on most occasions. The local station, W8JK, usually calls the Congo at about 4 p.m. Ann Arbor time, which is 9:30 p.m. for Station QOQ5AE in Africa. Dr. Kraus lives and has his workshop and equipment at 1155 Arlington Blvd.

For the past two years Dr. Kraus also has talked regularly with another missionary in the Congo, Dr. George W. Westcott, Ypsilanti man and graduate of the University of Michigan who is stationed about 500 miles from Rev. Stegall. The two missionaries know of each other but have never met.

Lubondai, where Rev. Stegall is
stationed, is about 1,200 miles by boat, rail and automobile from the Atlantic coast, and the trip takes 13 or 14 days.

Rev. Stegall is scheduled to make two appearances on national radio networks from Chicago within the next few weeks in dramatizations of his African experiences. He probably will be a guest on the Edgar A. Guest program over CBS on April 12 and will appear on the inside story hour over NBC on April 18.

RADIO DEVELOPS LONG-DISTANCE FRIENDSHIP: Dr. John D. Kraus (standing), local physicist, and Rev. C. R. Stegall, American missionary in the Belgian Congo, who have communicated with each other by radio for six years over a 7,000-mile distance, met for the first time in Ann Arbor last night. They are shown examining part of Dr. Kraus’s sending equipment.