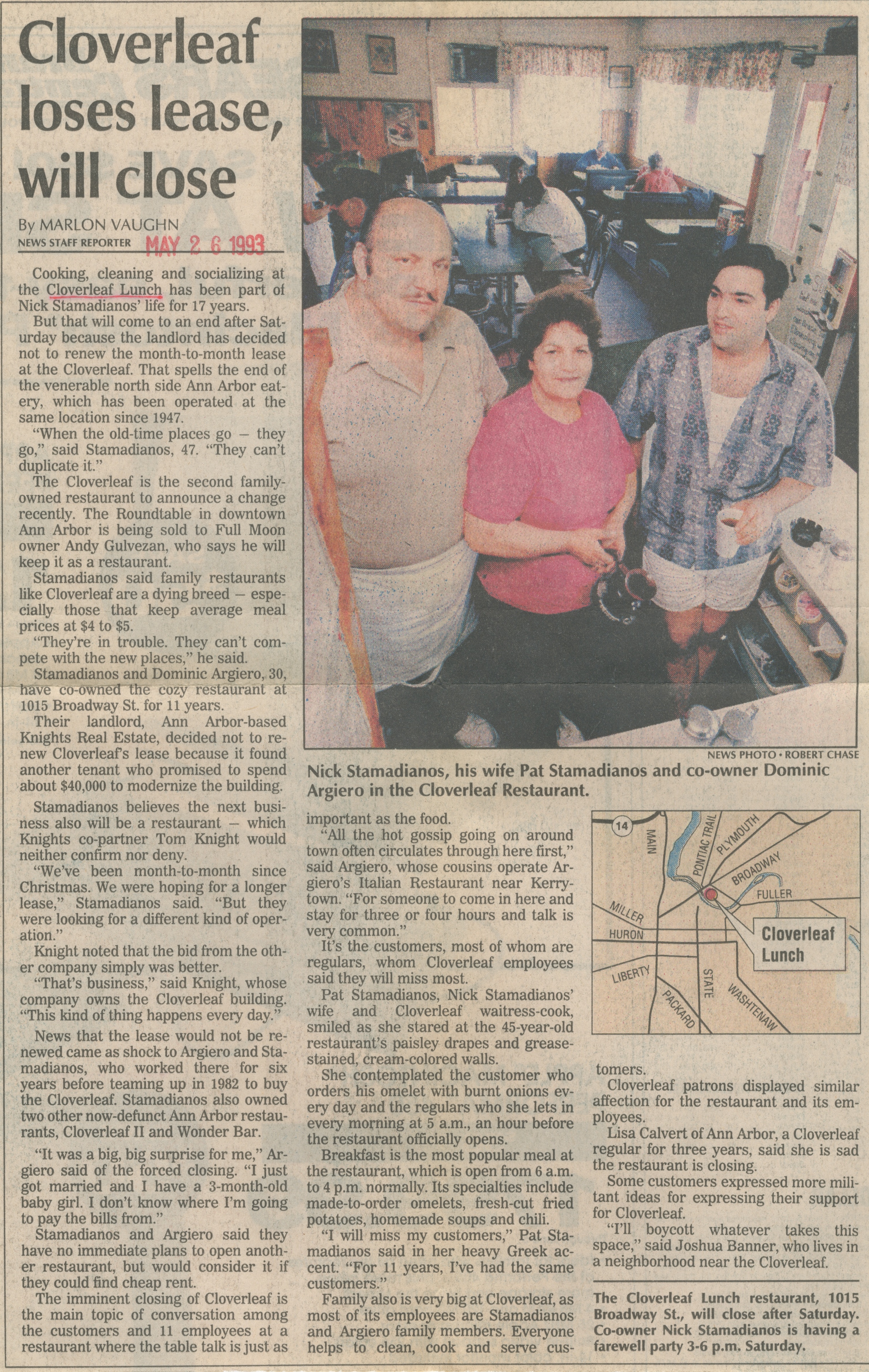 Cooking, cleaning and socializing at the Cloverleaf Lunch has been part of Nick Stamadianos’ life for 17 years.

But that will come to an end after Saturday because the landlord has decided not to renew the month-to-month lease at the Cloverleaf. That spells the end of the venerable north side Ann Arbor eatery, which has been operated at the same location since 1947.

The Cloverleaf is the second family-owned restaurant to announce a change recently. The Roundtable in downtown Ann Arbor is being sold to Full Moon owner Andy Gulvezan, who says he will keep it as a restaurant.

Stamadianos said family restaurants like Cloverleaf are a dying breed - especially those that keep average meal prices at $4 to $5.

“They’re in trouble. They can’t compete with the new places,” he said.

Stamadianos and Dominic Argiero, 30, have co-owned the cozy restaurant at 1015 Broadway St. for 11 years.

Their landlord, Ann Arbor-based Knights Real Estate, decided not to renew Cloverleaf's lease because it found another tenant who promised to spend about $40,000 to modernize the building.

Stamadianos believes the next business also will be a restaurant - which Knights co-partner Tom Knight would neither confirm nor deny.

“We’ve been month-to-month since Christmas. We were hoping for a longer lease,” Stamadianos said. “But they were looking for a different kind of operation.”

Knight noted that the bid from the other company simply was better.

News that the lease would not be renewed came as shock to Argiero and Stamadianos, who worked there for six years before teaming up in 1982 to buy the Cloverleaf. Stamadianos also owned two other now-defunct Ann Arbor restaurants, Cloverleaf II and Wonder Bar.

“It was a big, big surprise for me,” Argiero said of the forced closing. “I just got married and I have a 3-month-old baby girl. I don’t know where I’m going to pay the bills from.”

Stamadianos and Argiero said they have no immediate plans to open another restaurant, but would consider it if they could find cheap rent.

The imminent closing of Cloverleaf is the main topic of conversation among the customers and 11 employees at a restaurant where the table talk is just as important as the food.

“All the hot gossip going on around town often circulates through here first,” said Argiero, whose cousins operate Argiero’s Italian Restaurant near Kerrytown. “For someone to come in here and stay for three or four hours and talk is very common.”

It’s the customers, most of whom are regulars, whom Cloverleaf employees said they will miss most.

She contemplated the customer who orders his omelet with burnt onions every day and the regulars who she lets in every morning at 5 a.m., an hour before the restaurant officially opens.

Breakfast is the most popular meal at the restaurant, which is open from 6 a.m. to 4 p.m. normally. Its specialties include made-to-order omelets, fresh-cut fried potatoes, homemade soups and chili.

“I will miss my customers,” Pat Stamadianos said in her heavy Greek accent. “For 11 years, I’ve had the same customers.”

Family also is very big at Cloverleaf, as most of its employees are Stamadianos and Argiero family members. Everyone helps to clean, cook and serve customers.

Cloverleaf patrons displayed similar affection for the restaurant and its employees.

Lisa Calvert of Ann Arbor, a Cloverleaf regular for three years, said she is sad the restaurant is closing.

Some customers expressed more militant ideas for expressing their support for Cloverleaf.

“I’ll boycott whatever takes this space,” said Joshua Banner, who lives in a neighborhood near the Cloverleaf.

The Cloverleaf Lunch restaurant, 1015 Broadway St., will close after Saturday. Co-owner Nick Stamadianos is having a farewell party 3-6 p.m. Saturday.