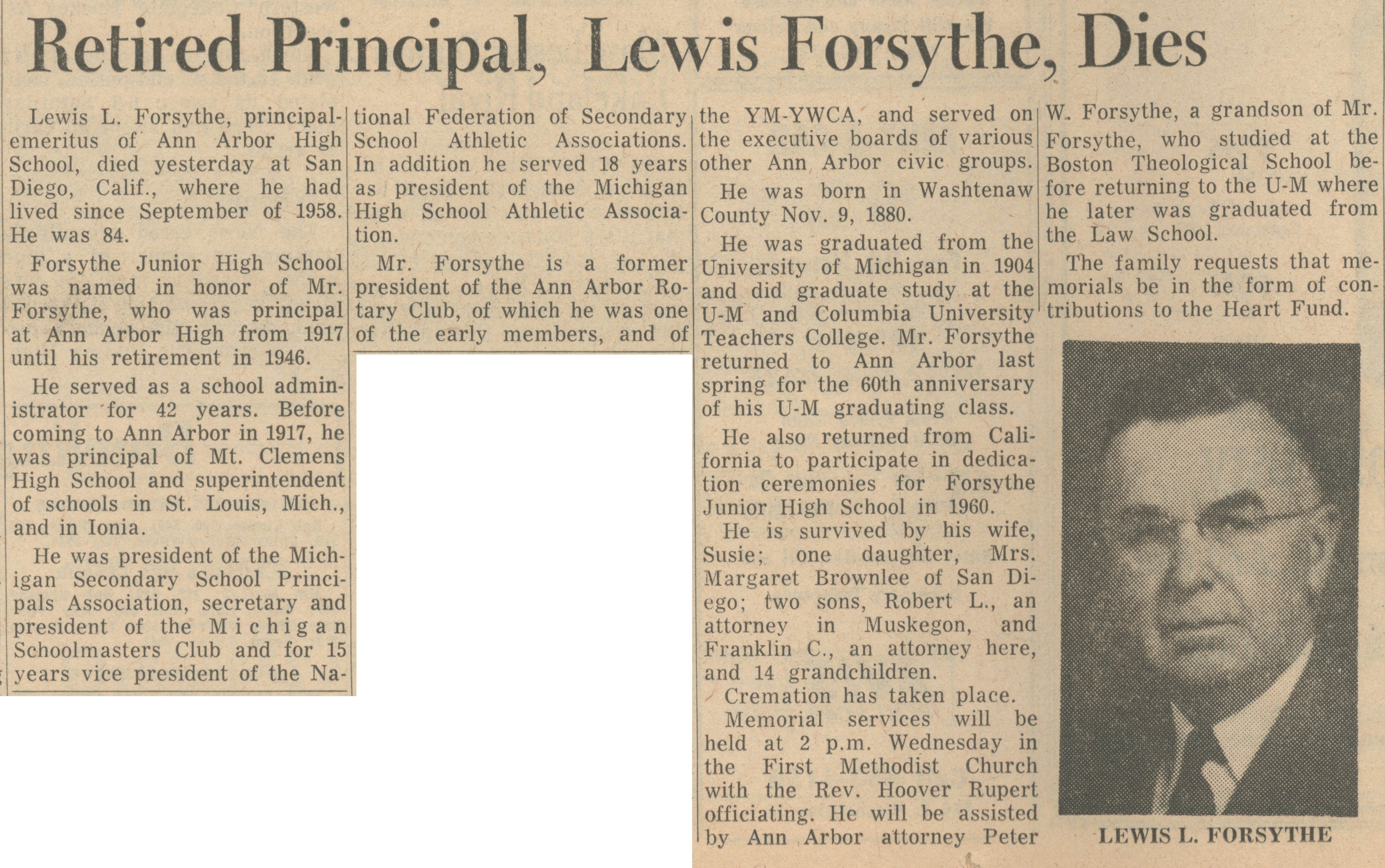 Lewis L. Forsythe, principal-emeritus of Ann Arbor High School, died yesterday at San Diego, Calif., where he had lived since September of 1958. He was 84.
Forsythe Junior High School was named in honor of Mr. Forsythe, who was principal at Ann Arbor High from 1917 until his retirement in 1946.
He served as a school administrator for 42 years. Before coming to Ann Arbor in 1917, he was principal of Mt. Clemens High School and superintendent of schools in St. Louis, Mich., and in Ionia.
He was president of the Michigan Secondary School Principals Association, secretary and president of the Michigan Schoolmasters Club and for 15 years vice president of the National Federation of Secondary School Athletic Associations. In addition he served 18 years as president of the Michigan High School Athletic Association.
Mr. Forsythe is a former president of the Ann Arbor Rotary Club, of which he was one of the early members, and of the YM-YWCA, and served on the executive boards of various other Ann Arbor civic groups.
He was born in Washtenaw County Nov. 9, 1880.
He was graduated from the University of Michigan in 1904 and did graduate study at the U-M and Columbia University Teachers College. Mr. Forsythe returned to Ann Arbor last spring for the 60th anniversary of his U-M graduating class.
He also returned from California to participate in dedication ceremonies for Forsythe Junior High School in 1960.
He is survived by his wife, Susie; one daughter, Mrs. Margaret Brownlee of San Diego; two sons, Robert L., an attorney in Muskegon, and Franklin C., an attorney here, and 14 grandchildren.
Cremation has taken place.
Memorial services will be held at 2 p.m. Wednesday in the First Methodit Church with the Rev. Hooper Rupert officiating. He will be assisted by Ann Arbor attorney Peter W. Forsythe, a grandson of Mr. Forsythe, who studied at the Boston Theological School before returning to the U-M where he later was graduated from the Law School.
The family requests that memorials be in the form of contributions to the Heart Fund.