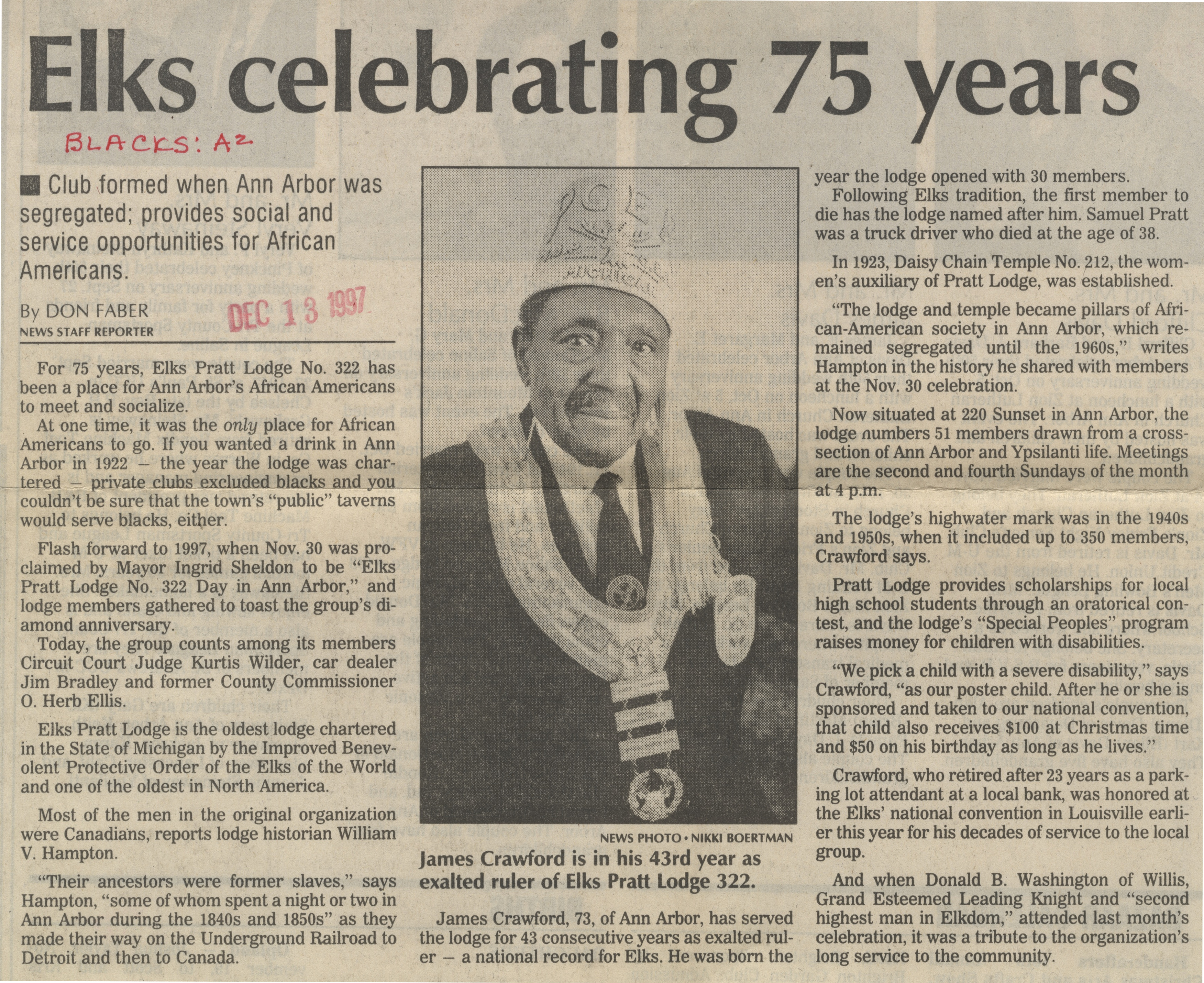 For 75 years. Elks Pratt Lodge No. 322 has been a place for Ann Arbor’s African Americans to meet and socialize.

At one time, it was the only place for African Americans to go. If you wanted a drink in Ann Arbor in 1922 - the year the lodge was chartered - private dubs excluded blacks and you couldn’t be sure that the town’s “public” taverns would serve blacks, either.

Flash forward to 1997, when Nov. 30 was proclaimed by Mayor Ingrid Sheldon to be “Elks Pratt Lodge No. 322 Day in Ann Arbor,” and lodge members gathered to toast the group’s diamond anniversary.

Elks Pratt Lodge is the oldest lodge chartered in the State of Michigan by the Improved Benevolent Protective Order of the Elks of the World and one of the oldest in North America.

Most of the men in the original organization were Canadians, reports lodge historian William V. Hampton.

“Their ancestors were former slaves,” says Hampton, “some of whom spent a night or two in Ann Arbor during the 1840s and 1850s” as they made their way on the Underground Railroad to Detroit and then to Canada.

James Crawford is in his 43rd year as exalted ruler of Elks Pratt Lodge 322.

James Crawford, 73, of Ann Arbor, has served the lodge for 43 consecutive years as exalted ruler - a national record for Elks. He was born the year the lodge opened with 30 members.

Following Elks tradition, the first member to die has the lodge named after him. Samuel Pratt was a truck driver who died at the age of 38.

In 1923, Daisy Chain Temple No. 212, the women’s auxiliary of Pratt Lodge, was established.

“The lodge and temple became pillars of African-American society in Ann Arbor, which remained segregated until the 1960s,” writes Hampton in the history he shared with members at the Nov. 30 celebration.

Now situated at 220 Sunset in Ann Arbor, the lodge numbers 51 members drawn from a cross-section of Ann Arbor and Ypsilanti life. Meetings are the second and fourth Sundays of the month at 4 p.m.

“We pick a child with a severe disability,” says Crawford, “as our poster child. After he or she is sponsored and taken to our national convention, that child also receives $100 at Christmas time and $50 on his birthday as long as he lives.”

Crawford, who retired after 23 years as a parking lot attendant at a local bank, was honored at the Elks’ national convention in Louisville earlier this year for his decades of service to the local group.

And when Donald B. Washington of Willis, Grand Esteemed Leading Knight and “second highest man in Elkdom,” attended last month’s celebration, it was a tribute to the organization’s long service to the community.