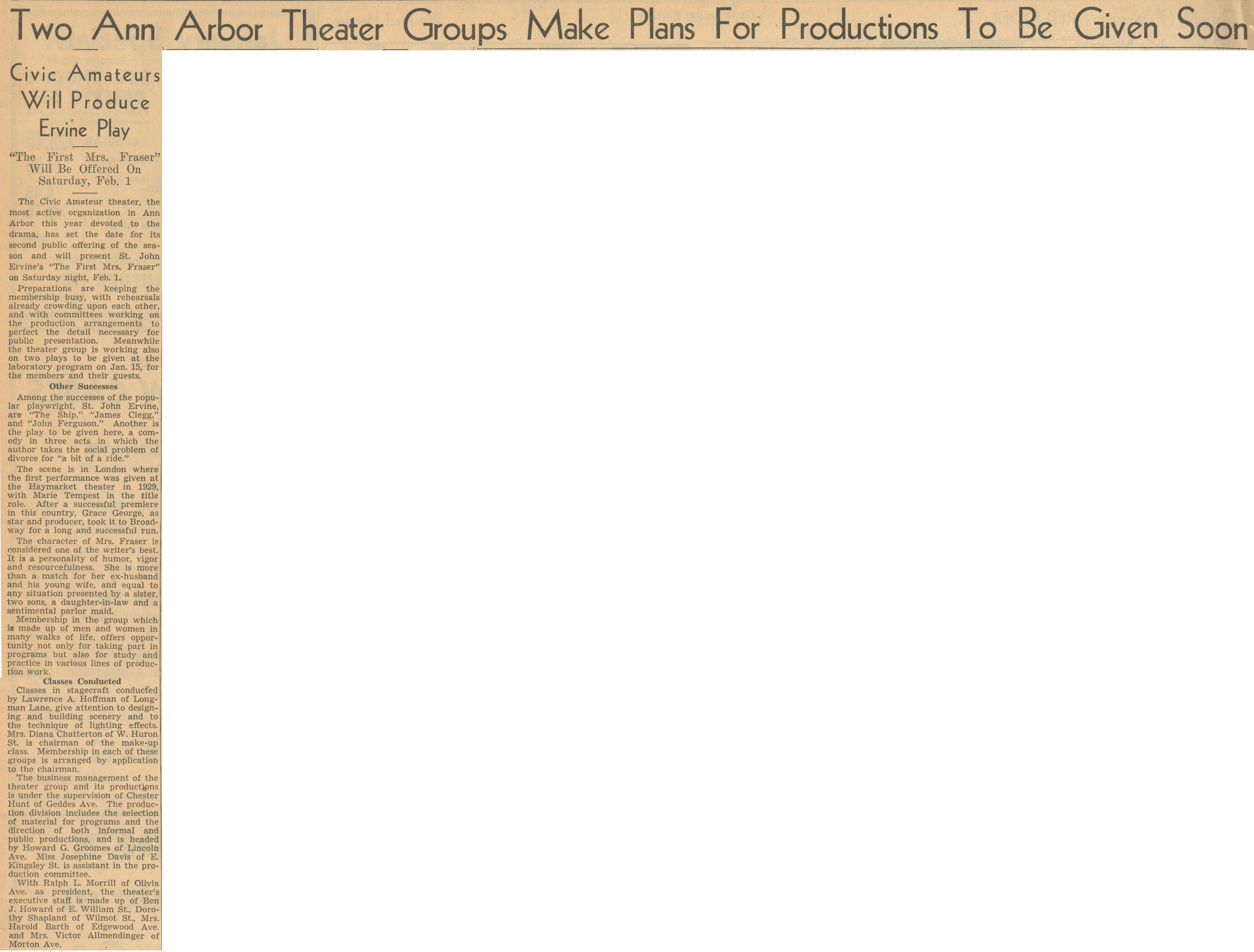 “The First Mrs. Fraser” Will Be Offered On Saturday, Feb. 1

The Civic Amateur theater, the most active organization in Ann Arbor this year devoted to the drama, has set the date for its second public offering of the season and will present St. John Ervine’s “The First Mrs. Fraser” on Saturday night, Feb. 1.

Preparations are keeping the membership busy, with rehearsals already crowding upon each other, and with committees working on the production arrangements to perfect the detail necessary for public presentation. Meanwhile the theater group is working also on two plays to be given at the laboratory program on Jan. 15, for the members and their guests.

Among the successes of the popular playwright, St. John Ervine, are "The Ship," "James Clegg," and "John Ferguson." Another is the play to be given here, a comedy in three acts in which the author takes the social problem of divorce for "a bit of a ride."

The scene is in London where the first performance was given at the Haymarket theater in 1929, with Marie Tempest in the title role. After a successful premiere in this country, Grace George, as star and producer, took it to Broadway for a long and successful run.

The character of Mrs. Fraser is considered one of the writer’s best. It is a personality of humor, vigor and resourcefulness. She is more than a match for her ex-husband and his young wife, and equal to any situation presented by a sister, two sons, a daughter-in-law and a sentimental parlor maid.

Membership in the group which is made up of men and women in many walks of life, offers opportunity not only for taking part in programs but also for study and practice in various lines of production work.

Classes in stagecraft conducted by Lawrence A. Hoffman of Longman Lane, give attention to designing and building scenery and to the technique of lighting effects. Mrs. Diana Chatterton of W. Huron St. is chairman of the make-up class. Membership in each of these groups is arranged by application to the chairman.

The business management of the theater group and its productions is under the supervision of Chester Hunt of Geddes Ave. The production division includes the selection of material for programs and the direction of both informal and public productions, and is headed by Howard G. Groomes of Lincoln Ave. Miss Josephine Davis of E. Kingsley St. is assistant in the production committee.

With Ralph L. Morrill of Olivia Ave. as president, the theater's executive staff is made up of Ben J. Howard of E. William St., Dorothy Shapland of Wilmot St., Mrs. Harold Barth of Edgewood Ave. and Mrs. Victor Allmendinger of Morton Ave.