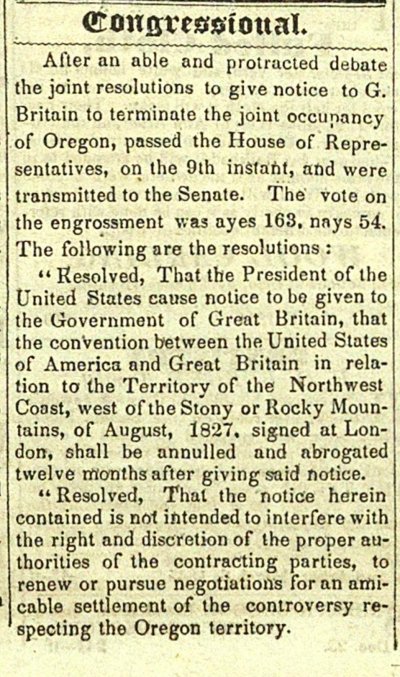 After an able and protracted debate the joint resolutions to give notice to G. Britain to termÃ­nate the joint occunancy of Orcgon, passed the House of Representatives, on the 9th instant, and were transmitted to the Senate. ThÃ© vote on the engrossment v.as ayes 168, nnys 54. The following are the resolutions : " Resolved, That the President of the United States cause notice to bo given to the Government of Great Britain, that the convention between the United States of America and Great Britain in relation to the Territory of the Northwest Coast, west oftheStony orllocky Mountains, of August, Ã827, signed at London, shall be annulled and nbrogated twelve months after giving said notice. 44 Resolved, Thai the notice herein contained is not intended to interfere with the right and discretion of the proper authorities of the contracting parties, to renew or pursue negotiations foran amicable settlement of the controversy respecting the Oregon territory.