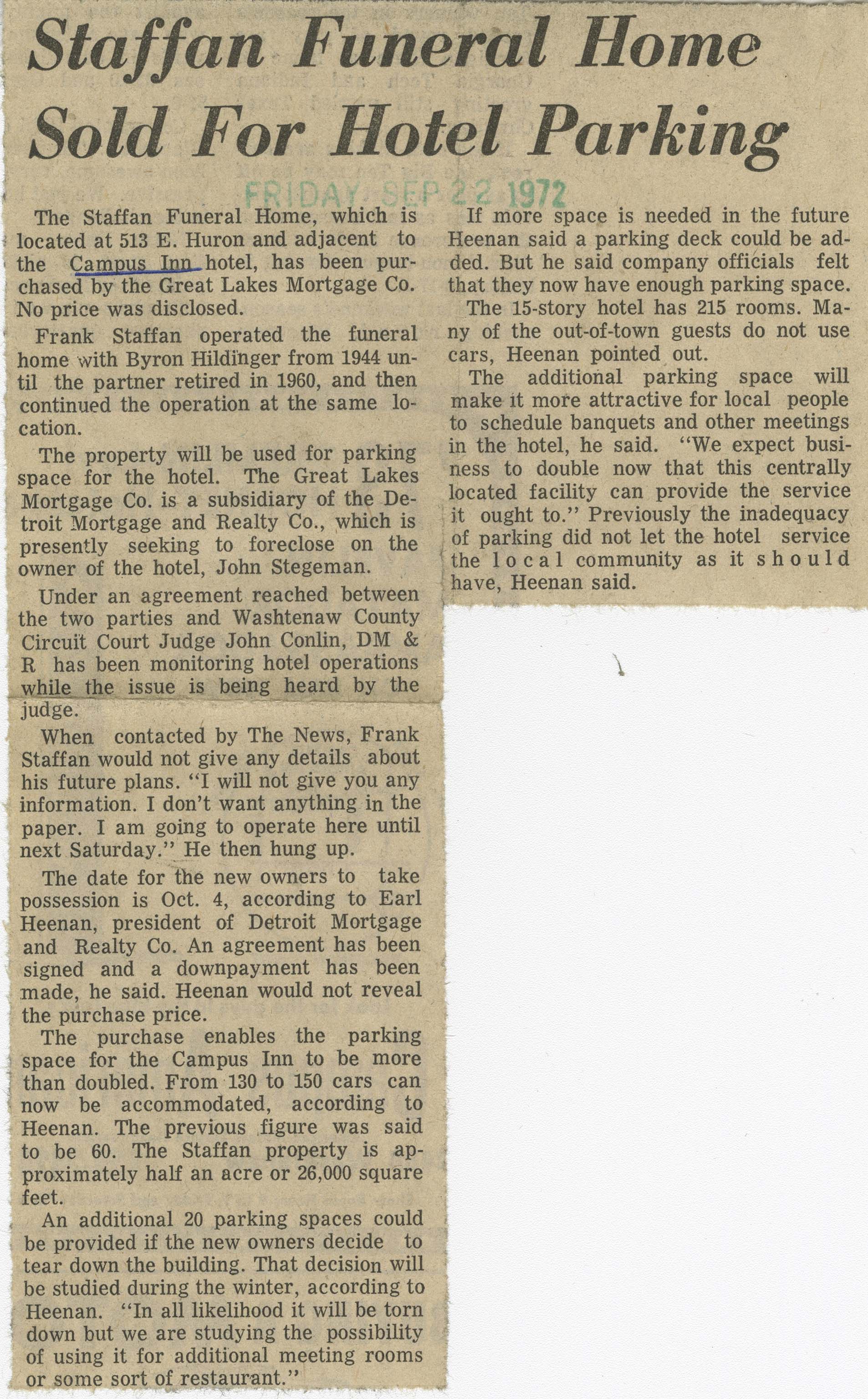 The Staffan Funeral Home, which is located at 513 E. Huron and adjacent to the Campus Inn hotel, has been purchased by the Great Lakes Mortgage Co. No price was disclosed.

Frank Staffan operated the funeral home with Byron Hildinger from 1944 until the partner retired in 1960, and then continued the operation at the same location.

The property will be used for parking space for the hotel. The Great Lakes Mortgage Co. is a subsidiary of the Detroit Mortgage and Realty Co., which is presently seeking to foreclose on the owner of the hotel, John Stegeman.

Under an agreement reached between the two parties and Washtenaw County Circuit Court Judge John Conlin, DM & R has been monitoring hotel operations while the issue is being heard by the

When contacted by The News, Frank Staffan would not give any details about his future plans. “I will not give you any information. I don’t want anything in the paper. I am going to operate here until next Saturday.” He then hung up.

The date for the new owners to take possession is Oct. 4, according to Earl Heenan, president of Detroit Mortgage and Realty Co. An agreement has been signed and a downpayment has been made, he said. Heenan would not reveal the purchase price.

The purchase enables the parking space for the Campus Inn to be more than doubled. From 130 to 150 cars can now be accommodated, according to Heenan. The previous figure was said to be 60. The Staffan property is approximately half an acre or 26,000 square feet.

An additional 20 parking spaces could be provided if the new owners decide to tear down the building. That decision will be studied during the winter, according to Heenan. “In all likelihood it will be tom down but we are studying the possibility of using it for additional meeting rooms.

If more space is needed in the future Heenan said a parking deck could be added. But he said company officials felt that they now have enough parking space.

The 15-story hotel has 215 rooms. Many of the out-of-town guests do not use cars, Heenan pointed out.

The additional parking space will make it more attractive for local people to schedule banquets and other meetings in the hotel, he said. “We expect business to double now that this centrally located facility can provide the service it ought to.” Previously the inadequacy of parking did not let the hotel service the local community as it should have, Heenan said.