Deja Vu All Over Again? Record Turnout For 1964 Presidential Election In Ann Arbor 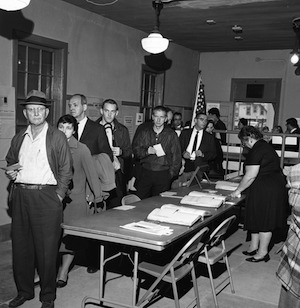 On November 3, 1964, the voters of Ann Arbor came to the polls to vote for President of the United States . . . and they came and they came. When the City Clerk finished counting, a new voter turnout record was set at 29,409. The Ann Arbor News tallies for Washtenaw County showed a 16,000 vote advantage for President Johnson over Barry Goldwater, a trend that was mirrored nationwide. Ann Arbor and the County also set a record for ticket-splitting, handing Governor Romney a sizable victory over Ann Arbor's Neil Staebler.

In the lead-up to the election, the News published a voter education guide, What You Should Know To Make Your Vote Count In 1964. The Guide featured profiles of the federal candidates and statewide candidates for Governor, Lt. Governor, Secretary of State and Attorney General. You'll see some very familiar names on the page. Included were civics lesson on Courts in Michigan, local elections and general elections. The 1964 election stood out for another reason: for the first time voters would elect the Governor and Lt. Governor as a team from the same political party. There was only one statewide ballot proposal and the question will be very familiar to voters in 2016.

The Ann Arbor City Clerk has a web site with all the info you'll need to vote. The last day to register to vote is Tuesday, October 11, 2016. If you're not sure if you're registered or your voter information is up-to-date, check it out on the SOS Michigan Vote site. If you'd like to vote absentee, you can print off the Application for Absentee Ballot directly or stop by one of AADL's branches and we'll be happy to print it out for you.

Ann Arbor probably has better voter turnout than most places. We are so cool!
TB