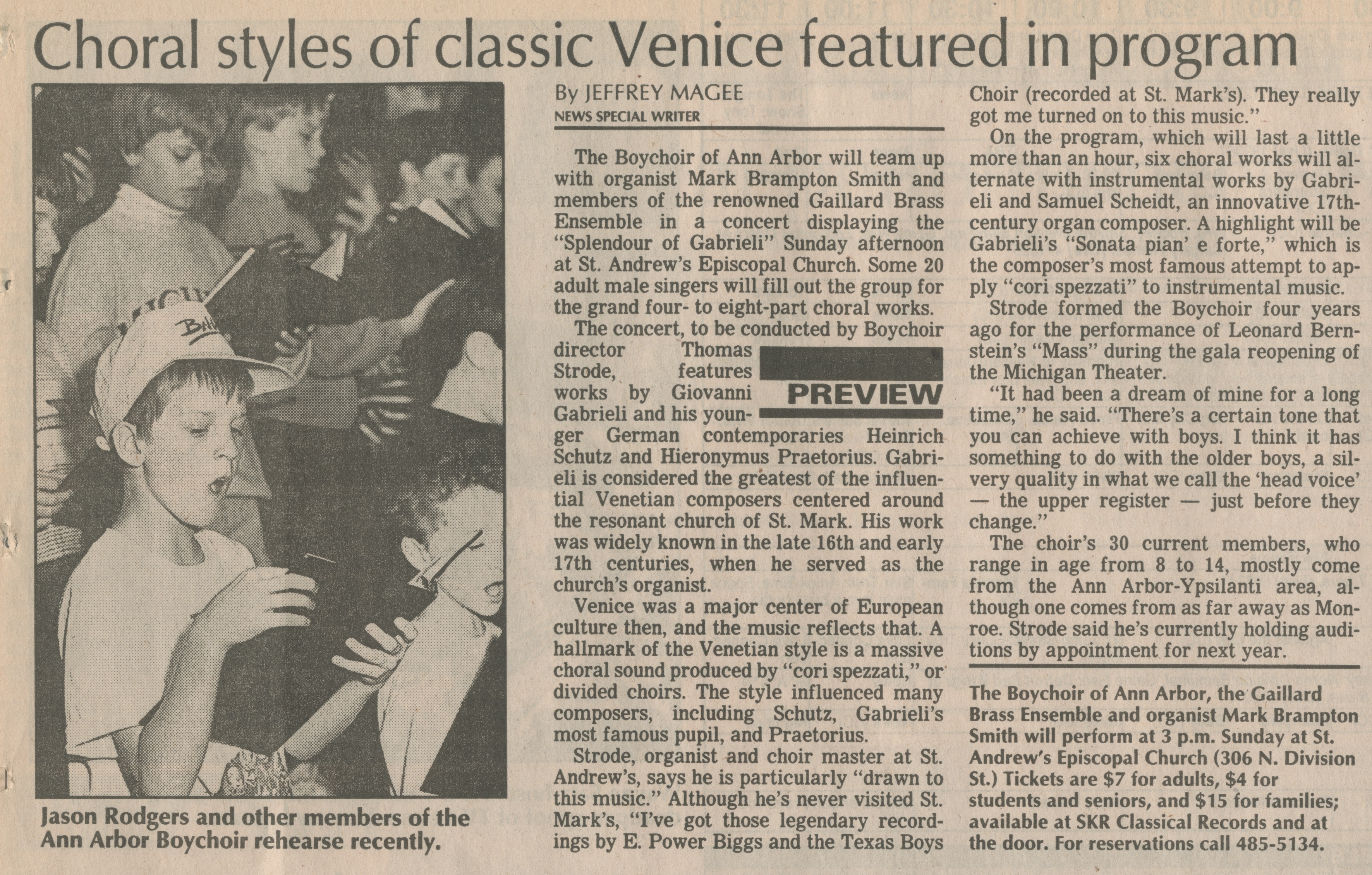 The Boychoir of Ann Arbor will team up with organist Mark Brampton Smith and members of the renowned Gaillard Brass Ensemble in a concert displaying the “Splendour of Gabrieli” Sunday afternoon at St. Andrew’s Episcopal Church. Some 20 adult male singers will fill out the group for the grand four- to eight-part choral works.

The concert, to be conducted by Boychoir director Thomas

Strode, features works by Giovanni Gabrieli and his younger German contemporaries Heinrich Schutz and Hieronymus Praetorius. Gabrieli is considered the greatest of the influential Venetian composers centered around the resonant church of St. Mark. His work was widely known in the late 16th and early 17th centuries, when he served as the church’s organist.

Venice was a major center of European culture then, and the music reflects that. A hallmark of the Venetian style is a massive choral sound produced by “cori spezzati,” or divided choirs. The style influenced many composers, including Schutz, Gabrieli’s most famous pupil, and Praetorius.

Strode, organist and choir master at St. Andrew’s, says he is particularly “drawn to this music.” Although he’s never visited St. Mark’s, “I’ve got those legendary recordings by E. Power Biggs and the Texas Boys Choir (recorded at St. Mark’s). They really got me turned on to this music.”

On the program, which will last a little more than an hour, six choral works will alternate with instrumental works by Gabrieli and Samuel Scheidt, an innovative 17th-century organ composer. A highlight will be Gabrieli’s “Sonata pian’ e forte,” which is the composer’s most famous attempt to apply “cori spezzati” to instrumental music.

Strode formed the Boychoir four years ago for the performance of Leonard Bernstein’s “Mass” during the gala reopening of the Michigan Theater.

"It had been a dream of mine for a long time,” he said. “There’s a certain tone that you can achieve with boys. I think it has something to do with the older boys, a silvery quality in what we call the ‘head voice’ — the upper register — just before they change.”

The choir’s 30 current members, who range in age from 8 to 14, mostly come from the Ann Arbor-Ypsilanti area, although one comes from as far away as Monroe. Strode said he’s currently holding auditions by appointment for next year.

The Boychoir of Ann Arbor, the Gaillard Brass Ensemble and organist Mark Brampton Smith will perform at 3 p.m. Sunday at St. Andrew's Episcopal Church (306 N. Division St.) Tickets are $7 for adults, $4 for students and seniors, and $15 for families; available at SKR Classical Records and at the door. For reservations call 485-5134.

Jason Rodgers and other members of the Ann Arbor Boychoir rehearse recently.