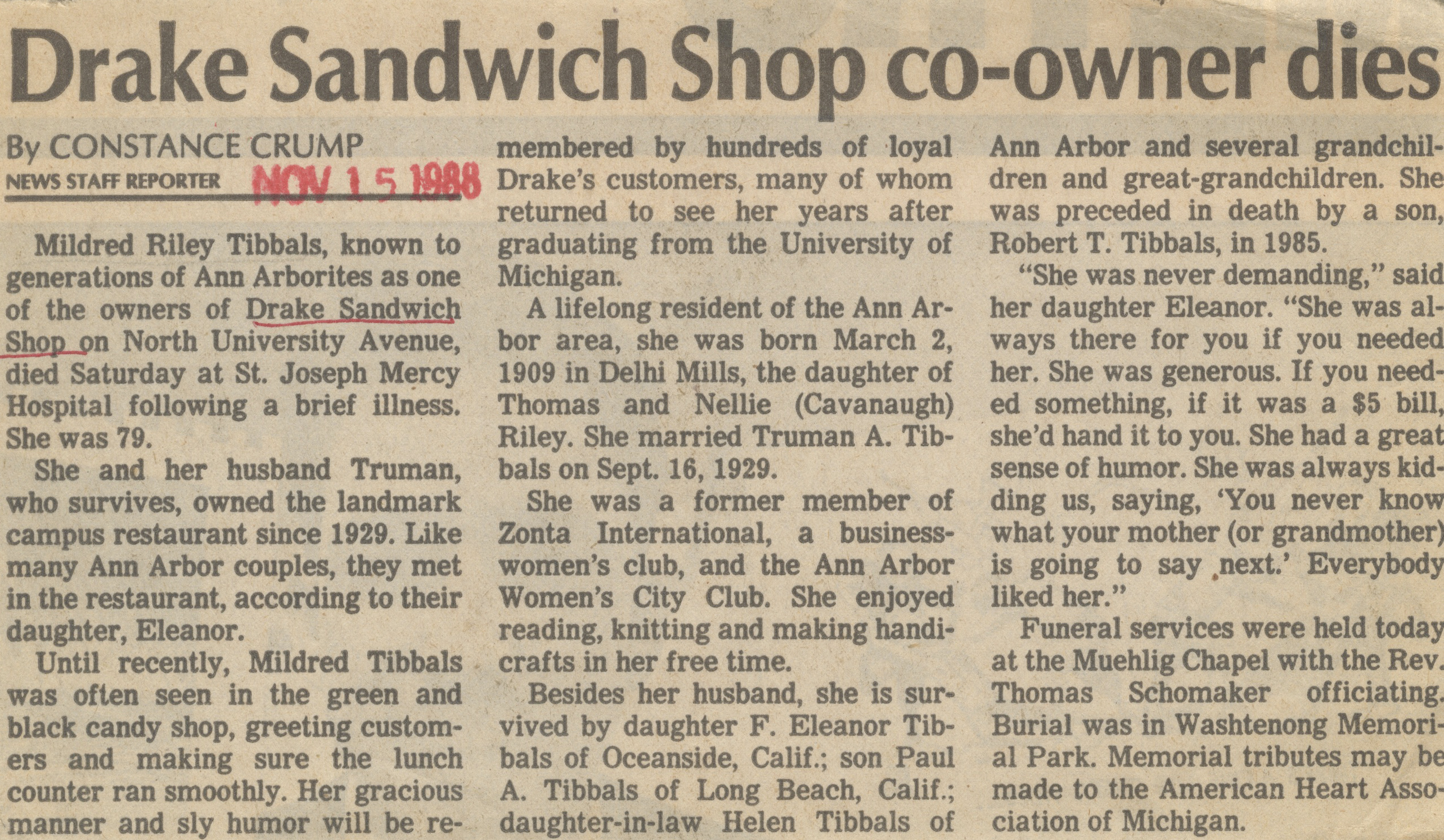 Mildred Riley Tibbals, known to generations of Ann Arborites as one of the owners of Drake Sandwich Shop on North University Avenue, died Saturday at St. Joseph Mercy Hospital following a brief illness. She was 79.

She and her husband Truman, who survives, owned the landmark campus restaurant since 1929. Like many Ann Arbor couples, they met in the restaurant, according to their daughter, Eleanor.

Until recently, Mildred Tibbals was often seen in the green and black candy shop, greeting customers and making sure the lunch counter ran smoothly. Her gracious manner and sly humor will be remembered by hundreds of loyal Drake’s customers, many of whom returned to see her years after graduating from the University of Michigan.

A lifelong resident of the Ann Arbor area, she was born March 2, 1909 in Delhi Mills, the daughter of Thomas and Nellie (Cavanaugh) Riley. She married Truman A. Tibbals on Sept. 16,1929.

She was a former member of Zonta International, a businesswomen’s club, and the Ann Arbor Women’s City Club. She enjoyed reading, knitting and making handicrafts in her free time.

Besides her husband, she is survived by daughter F. Eleanor Tibbals of Oceanside, Calif.; son Paul A. Tibbals of Long Beach, Calif.; daughter-in-law Helen Tibbals of Ann Arbor and several grandchildren and great-grandchildren. She was preceded in death by a son, Robert T. Tibbals, in 1985.

“She was never demanding,” said her daughter Eleanor. “She was always there for you if you needed her. She was generous. If you needed something, if it was a $5 bill, she’d hand it to you. She had a great sense of humor. She was always kidding us, saying, ‘You never know what your mother (or grandmother) is going to say .next.’ Everybody liked her.”

Funeral services were held today at the Muehlig Chapel with the Rev. Thomas Schomaker officiating. Burial was in Washtenong Memorial Park. Memorial tributes may be made to the American Heart Association of Michigan.