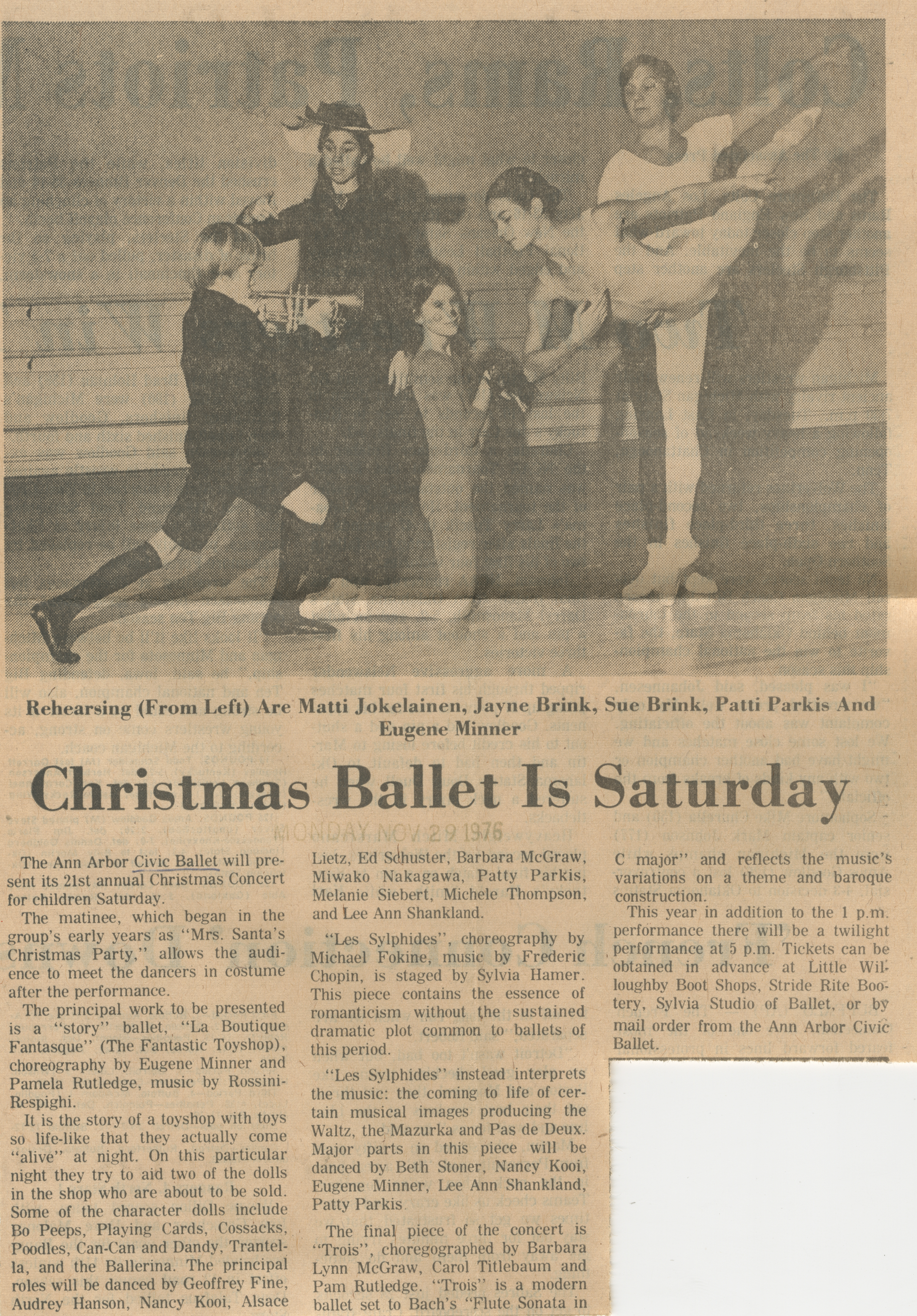 The matinee, which began in the group’s early years as “Mrs. Santa’s Christmas Party,” allows the audience to meet the dancers in costume after the performance.

The principal work to be presented is a “story” ballet, “La Boutique Fantasque” (The Fantastic Toyshop), choreography by Eugene Minner and Pamela Rutledge, music by Rossini-Respighi.

It is the story of a toyshop with toys so life-like that they actually come “alive” at night. On this particular night they try to aid two of the dolls in the shop who are about to be sold. Some of the character dolls include Bo Peeps, Playing Cards, Cossacks, Poodles, Can-Can and Dandy, Trantella, and the Ballerina. The principal roles will be danced by Geoffrey Fine, Audrey Hanson, Nancy Kooi, Alsace Lietz, Ed Schuster, Barbara McGraw, Miwako Nakagawa, Patty Parkis, Melanie Siebert, Michele Thompson, and Lee Ann Shankland.

“Les Sylphides”, choreography by Michael Fokine, music by Frederic Chopin, is staged by Sylvia Hamer. This piece contains the essence of romanticism without the sustained dramatic plot common to ballets of this period.

“Les Sylphides” instead interprets the music: the coming to life of certain musical images producing the Waltz, the Mazurka and Pas de Deux. Major parts in this piece will be danced by Beth Stoner, Nancy Kooi, Eugene Minner, Lee Ann Shankland, Patty Parkis.

The final piece of the concert is “Trois”, choreographed by Barbara Lynn McGraw, Carol Titlebaum and Pam Rutledge. “Trois” is a modern ballet set to Bach’s “Flute Sonata in C major” and reflects the music’s variations on a theme and baroque construction.

This year in addition to the 1 p.m. performance there will be a twilight , performance at 5 p.m. Tickets can be obtained in advance at Little WilIoughby Boot Shops, Stride Rite Bootery, Sylvia Studio of Ballet, or by mail order from the Ann Arbor Civic Ballet.